Chile formally submitted its 2020 NDC in April 2020. Even though the updated NDC is more ambitious than the first NDC and is a slight improvement from the draft released in October 2019, it is not compatible with efforts to limit global warming to 2°C and even less to 1.5°C, and would fall within the CAT’s ‘Insufficient’ range. Depending on LULUCF emission projections, its conditional 2030 target would be 2°C or 1.5°C compatible, but only if it were made unconditional. Both targets are more ambitious, therefore this update represents a progression beyond its previous NDC.

Scroll down for a detailed analysis of Chile’s NDC update or click the button to view the latest CAT assessment for Chile.

The Chilean Government officially released its updated NDC on 9 April 2020, and it builds on a draft version released for public consultation in October 2019.

The new NDC has a target of 95 MtCO2e in 2030 is significantly lower than the emissions that would have resulted from the intensity target of the first NDC (131 MtCO2e). The previous NDC did not include a peak year or a budget.

Chile has improved on each of the mitigation components compared to its October 2019 draft: the emissions cap has been reduced by 2MtCO2e in 2030 (97 compared to 95 MtCO2e), the emissions budget has been limited to 1110 MtCO2e, and the peak year has been brought forward by two years, from 2027 to 2025. While each of these improvements is a step in the right direction, these measures are not enough to improve the CAT rating of the 2019 NDC, which remains in the ‘Insufficient’ range.

The CAT estimates that by implementing all of its planned policies, Chile could reduce its emissions to 99 to 101 MtCO2e by 2030 (around 5 MtCO2e above the new target) and peak its emissions in 2023 (two years earlier than the 2025 date in its NDC update). Under this scenario the carbon budget between 2020 and 2030 would be 2-4% lower than the carbon budget presented in the NDC update document.

The updated NDC also includes separate targets for the LULUCF sector. These are more ambitious than in the previous NDC (but remain the same as the 2019 draft proposal):

Chile will also undertake to identify peatlands and other wetlands as part of a national inventory by 2025 and develop standardised metrics to evaluate their mitigation capacity by 2030.

The NDC (and the proposal of 2019) clearly spells out Chile’s goal to achieve GHG neutrality by 2050. The previous NDC did not include such a goal, previous announcements were termed around carbon neutrality (not all greenhouse gases). 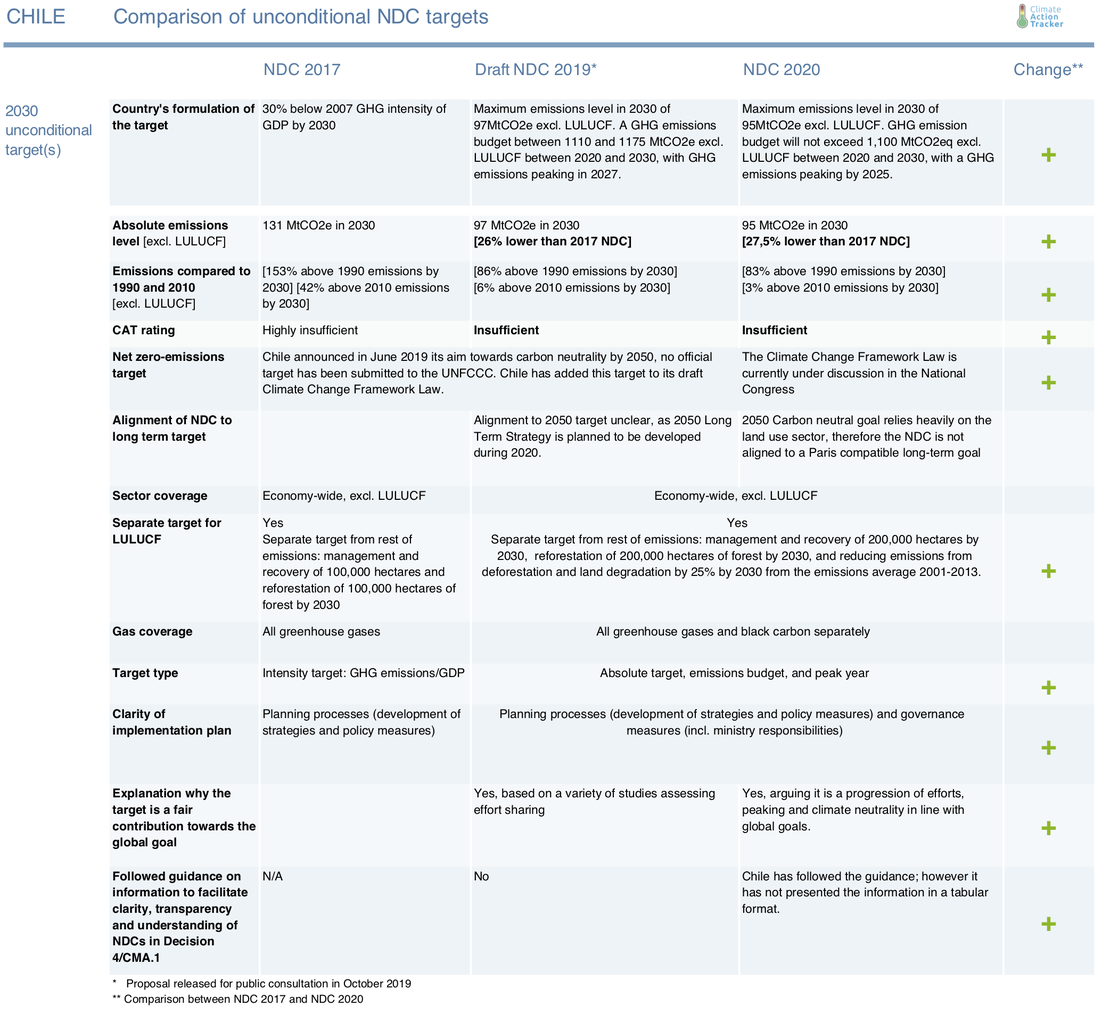 The submitted NDC contains a conditional 2030 target of up to 45% net GHG emissions reduction by 2030 from 2016 levels. The target is much more ambitious than the previous conditional intensity target, but remained unchanged from the October 2019 draft. No further details have been provided, making the target difficult to assess. The CAT’s original analysis of this target is available here.

Details of other supporting targets

Chile’s updated NDC includes a separate target for black carbon emissions. It has committed to reducing those emissions by at least 25% below 2016 levels by 2030. This is a stronger target than that proposed in the October 2019 draft, which had a target of between 10 to 25%. A black carbon emission reduction target was not included in Chile’s first NDC.