Viet Nam submitted its updated NDC in September 2020. While numerically stronger, it can still be easily met with current policies and will not drive further climate action. The CAT rating remains unchanged as ‘Critically Insufficient’. The transparency and sectoral coverage of the NDC has improved.

Scroll down for a detailed analysis of Viet Nam’s NDC update or click the button to view the latest CAT assessment for Viet Nam.

Viet Nam set a new unconditional nationally determined contribution (NDC) target of a 9% emissions reduction below a new business-as-usual (BAU) trajectory, which now covers all sectors of the economy including LULUCF.

The new NDC is still 67% higher than the emissions level in 2030 based on the CAT’s current policy projection. The new NDC claims it represents Viet Nam’s ‘highest level of efforts’, yet it is not a true progression in scaling up climate action, as it does not require any additional effort compared to current policies.

CAT’s rating is based on Viet Nam’s BAU targets. However, the first NDC had an additional sub-target for a 20% reduction in emissions intensity per unit of GDP compared to 2010 levels. The status of this additional intensity target was unclear, and it has now been dropped. CAT converted the intensity target to absolute emissions levels for 2030, calculated to be 872 MtCO2e/yr (excluding LULUCF). The old NDC sub-target was slightly more ambitious (4%) than the new NDC.

The CAT rates the new NDC target “Critically insufficient”. Viet Nam’s climate commitment in 2030 is consistent with a warming of over 4°C: if all countries were to follow Viet Nam’s approach, warming would exceed 4°C. This means Viet Nam's climate commitment is not in line with any interpretation of a “fair” approach to the former 2°C goal, let alone the Paris Agreement’s 1.5°C limit.

Viet Nam is on track to vastly overachieve its updated NDC based on its current policies. The new targets are based on a BAU scenario that has been updated since the first NDC based on the latest historical data. The first NDC BAU was hyper inflated, represented in our CAT assessment where Viet Nam’s current policy trajectory is significantly lower in 2030.

The new BAU includes emissions from industrial processes and product use (IPPU). CAT added IPPU to the old BAU to make the targets comparable. The new BAU is calculated to be 2% higher compared to the old BAU in emissions levels for 2030 (including IPPU). This level is 67% higher than current policy projections, implying the new target for 2030 will be largely overachieved without any additional effort compared to current policies.

A target based on a reduction from current policy projections would ensure real progress in climate action. The current policies projection used by the CAT would offer a more suitable baseline for targets than the very high BAU that the Viet Nam government used. The government assumes for that BAU very optimistic economic growth that does not correspond to past trends.

The NDC target now has economy wide coverage. The updated NDC included industrial process and product use emissions (in particular from cement production). This sector represented 13% of Viet Nam’s emissions in 2014 (excluding LULUCF). The latest CAT update factored in industrial processes and product use emissions to the first NDC to provide an economy wide and comparable target quantification.

The first NDC had a LULUCF related target to increase forest cover by 45%. The updated NDC has included transparency with a sector breakdown of how the target will be achieved. By 2030, LULUCF emission are targeted to be 1% below BAU in 2030, or translated into absolute terms: -59 MtCO2e in 2030 (in the unconditional target). This is an improvement from the first NDC with transparent and quantifiable emissions detailed in the NDC document. However, it is a deterioration from the first NDC technical report, where LULUCF represented -68 MtCO2e in 2030 (in the unconditional target).

The implementation plan of the updated NDC is not clear as there are a number of measures listed without a timeframe. However, the updated NDC offers considerably more information in relation to sectoral targets, an impact assessment, a co-benefit analysis, and indicators for monitoring and evaluation compared to the first NDC, improving on transparency and clarity, but with only a little improvement on ambition.

While Viet Nam has made some improvements to the structure of its NDC, it did reduce its coverage of gases. The updated NDC does not include full greenhouse gas coverage, as it does not include PFCs and SF6. These were stated to be included in the old NDC, although they were not mentioned in the technical report to the first NDC. 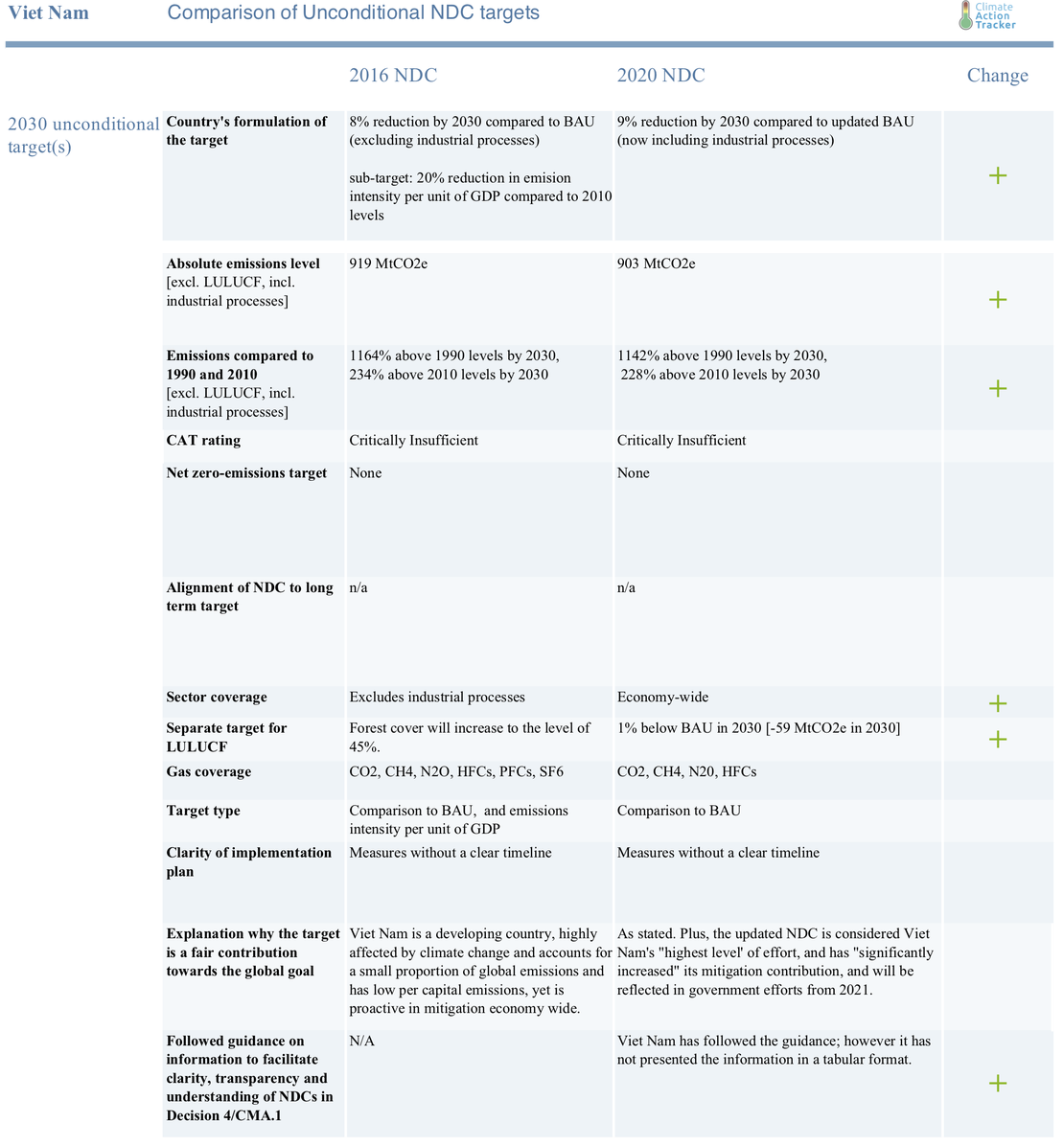 The first NDC also had a conditional sub-target of 40% reduction in emissions intensity per unit of GDP compared to 2010 levels, which translates to 815 MtCO2e/yr absolute emissions levels in 2030 (excluding LULUCF). The updated target results in a decrease of 8% in target emissions for 2030, compared to this sub-target. 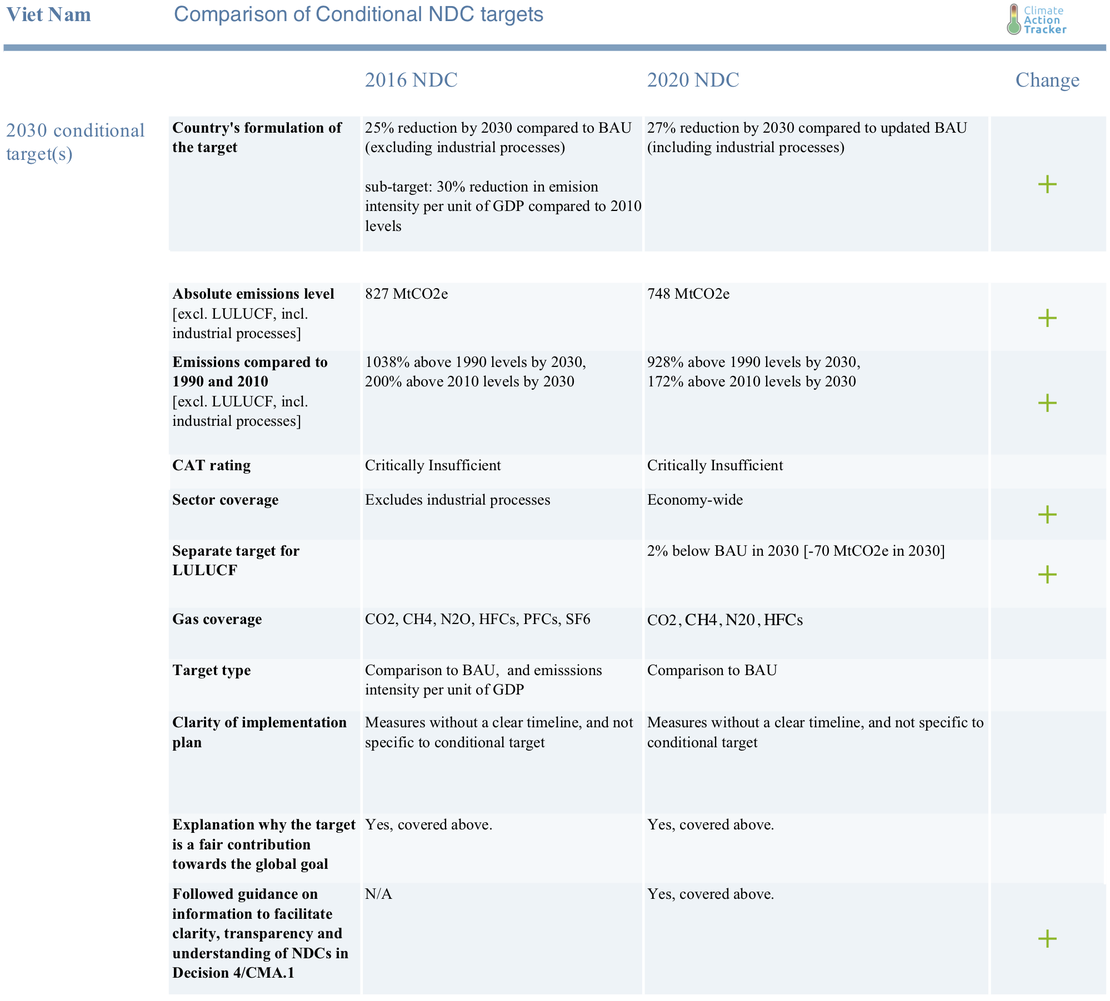