Australia can decarbonise its energy system by 2050 by scaling up climate action in its electricity supply and energy end use sectors, creating up to 76,000 additional jobs in the renewables sector alone, according to a new report by the Climate Action Tracker.

In the “Scaling up Climate Action: Australia” report, released today, the CAT has found that accelerating a transition to a zero-carbon, renewables-based electricity supply by the 2030’s will bring large domestic employment opportunities. It shows an economically and technically feasible pathway that results in more than halving emissions by 2030 and achieves net zero greenhouse gas emissions by 2050 through action across all sectors of the economy.

The report is published as a bill is introduced to the Australian Parliament proposing a bipartisan approach to climate change, setting up a clear framework toward achieving a net-zero emissions by 2050 goal.

“This report shows how Australia can get on a pathway to net zero emissions in line with the Paris Agreement goal of limiting warming to 1.5C, increasing employment and ratcheting up its 2030 target from the currently inadequate 26-28% to a 66% emissions reduction,” said Bill Hare, CEO and Senior Scientist of Climate Analytics.

“We show how this is feasible. But it needs real climate policy across all sectors of the economy. An important first step to achieving this is a planned and managed phase out of coal from power generation by 2030.”

“Unlike other reports, our modelled scenarios do not rely on extensive carbon storage through carbon sequestration in the land sector. We provide a more balanced approach that protects biodiversity and water resources to compensate for emissions from hard-to-abate sectors such as agriculture, thus,” she said .

“We also see no role for any additional gas in the electricity sector, not even as a transition fuel: we simply won’t need it.”

The in-depth analysis focuses on Australia’s potential to increase mitigation efforts in the electricity supply, transport, industry, and buildings sectors, while providing an integrated energy system approach and a pathway for greenhouse gas emissions reductions across all sectors consistent with the Paris Agreement 1.5degC limit.

It first reviews the current policy framework then undertakes a scenario analysis, using Paris Agreement benchmarks, “best in class” international frontrunners, and national scenarios, taking into account the specific characteristics of Australia’s energy intensive industry and LNG export sector and the current focus on extraction and export of fossil fuels, and the key role of the power sector to decarbonise these sectors by, at latest, 2050. 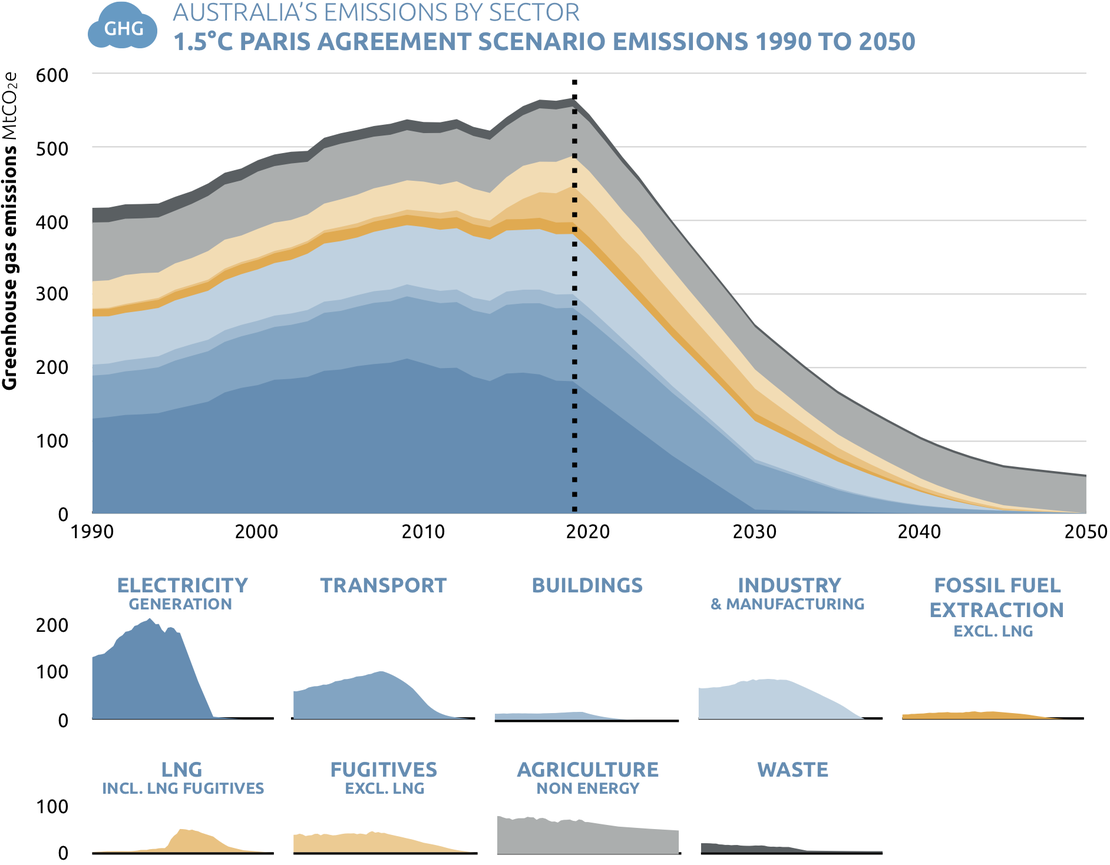