Government climate policies globally are likely to lead to a breaching of the 1.5degree warming limit by 2035, 2 degrees by 2053 and a total warming of 3.2 degrees by the end of the century, the Climate Action Tracker (CAT) warned today in its latest update.

This projection is based on a special CAT update to provide a benchmark for measuring promises of further action. It has been released ahead of UN Secretary General Antonio Guterres’ Climate Summit in New York on Monday, for which he has called on Governments to announce strengthened emission reduction targets - which need to be submitted to the Paris Agreement in 2020.

The CAT will track progress against benchmark warming and the emissions gap between the UN Climate Action Summit on September 23, 2019 and the end of 2020 when governments are requested to have submitted much more ambitious Paris Agreement commitments. 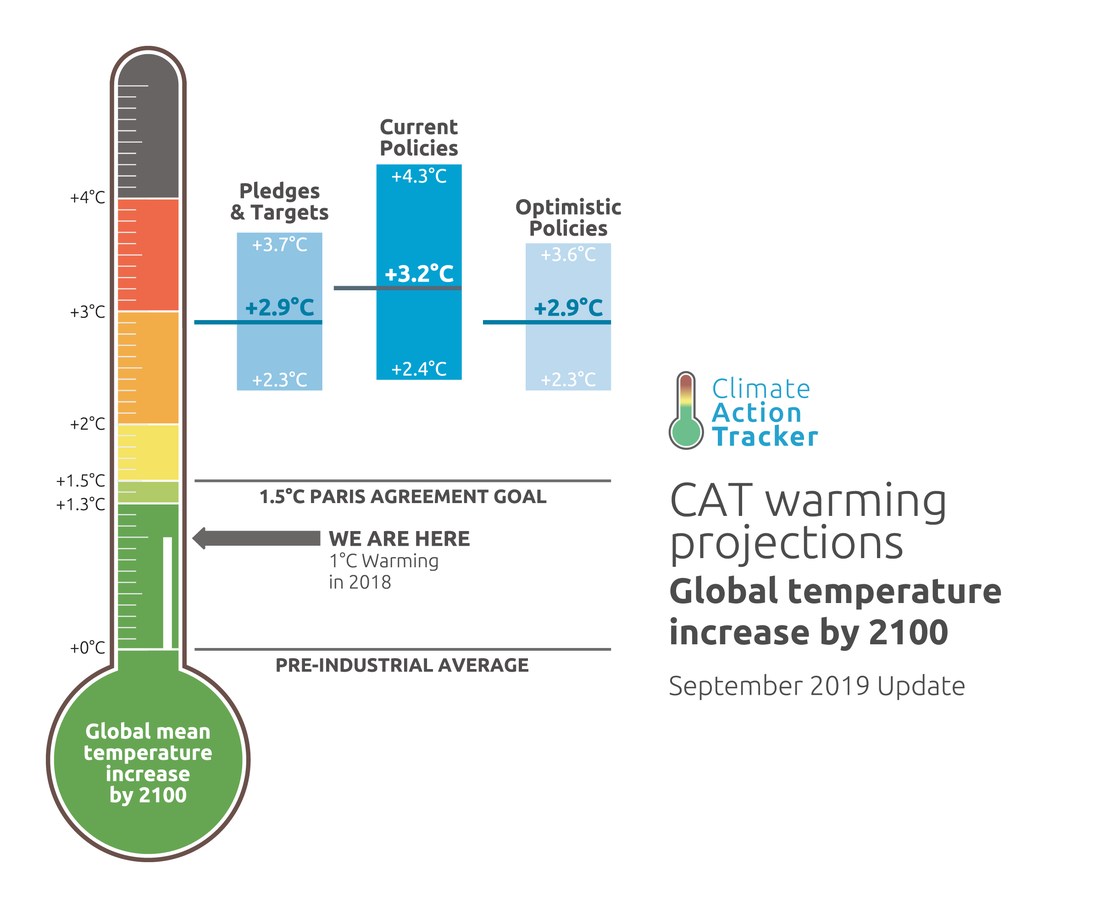 The CAT current policy warming projections are based on the national policies governments actually have in place, and show these would result in a warming of 3.2 degrees C in 2100. The CAT pledges and targets warming projections are based on what warming would be if governments take all the action they have promised under the Paris Agreement - and would see warming of 2.9 degrees C in 2100.

Under both current policy and Paris pledges and targets, there is a ten percent chance of exceeding 4˚C of warming by the end of the century and up to a 25% chance if current policies are not improved. Even the CAT optimistic policy scenario, that takes an optimistic view of government policies and includes those that are planned, warming would still be at 2.9˚C.

“We’re heading to at least twice the warming limit governments agreed four years ago: it’s time for them to strengthen their Paris Agreement targets, as promised, and rapidly scale up action at home. We are inching forward, at best,” said Bill Hare, CEO of Climate Analytics, a CAT partner.

Hare noted the purpose of the CAT update was to set the benchmark against which to judge the announcements expected from governments in the coming months.

“We will update this assessment regularly to assess progress in lowering the projected warming level based on government action and promises, in order to track how far these announcements are able to bring down the warming estimates.”

As part of its update, the CAT looked at a selection of seven countries: Australia, Chile, China, the EU, India, Indonesia, and Russia, and looked at their 2030 targets under three different scenarios: 1.5˚compatible, what it would take to improve the target to the next level of CAT rating, and its current path.

“All governments have room for improvement. Many achieve or overachieve their commitments submitted to the Paris Agreement and these would improve if they propose internationally what they are already doing at home,” said Niklas Höhne, partner at NewClimate Institute, the other CAT partner.

“Examples are China, EU and India. But that would still not be enough. Significant step-changes are necessary as we are not just a little bit off track, we are way off track.”