If the Biden Administration wants the US to be a climate leader, its new 2030 Paris Agreement target should aim for national emissions reductions of at least 57-63% below 2005 levels,1 according to the Climate Action Tracker (CAT). 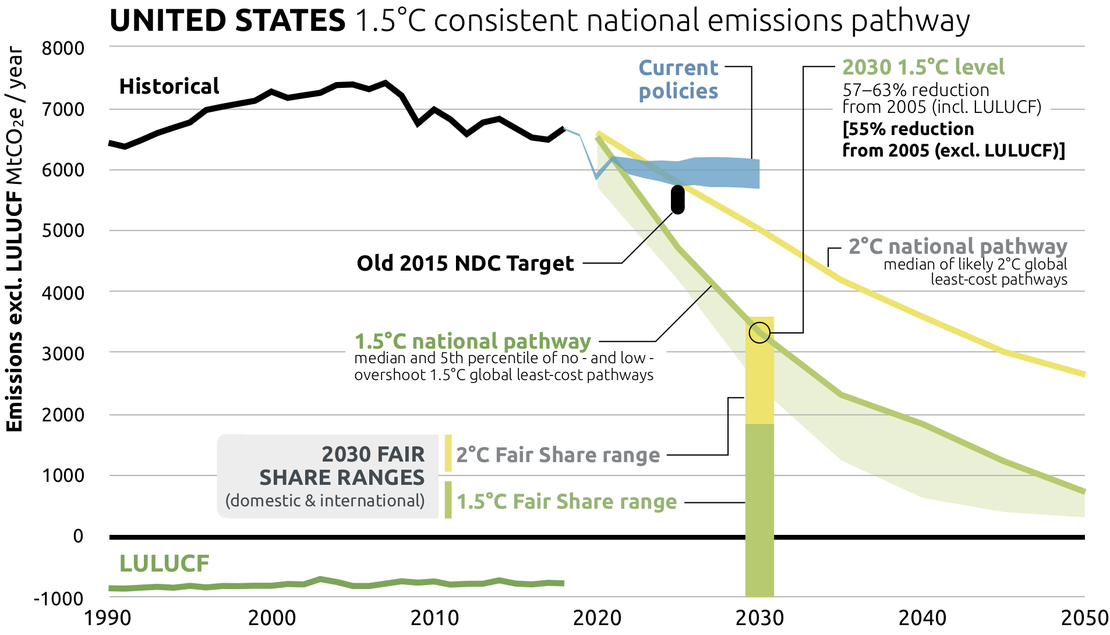 This would be a domestic target, and would set the US emissions onto a pathway that would achieve President Biden’s promised net zero by 2050 target. He will host a “Climate Leaders’ Summit” on 22 April, and is expected to announce his new target before that date.

“Even if President Biden were to adopt the Paris Agreement 2030 target we suggest he should, he still needs to implement policies to get the US onto this emissions pathway towards zero greenhouse gas emissions,” said Professor Niklas Höhne, of NewClimate Institute, one of the two CAT partner organisations.

“He has already announced a number of plans, which are positive first steps, but not all of them are Paris Agreement compatible, nor would they be enough to meet our suggested 1.5˚C compatible target.”

The CAT analysis looks at President Biden’s plans for three sectors - a carbon-free electricity sector by 2035; aiming for 100% zero-emissions vehicles, and halving the carbon footprint in the buildings sector by 2035 - and compares them with benchmarks defined in its benchmarks report.

“For President Biden to show true climate leadership, we would want to see him coming forward with an ambitious, science-based target that would encourage domestic action toward decarbonising the economy,” said Bill Hare of Climate Analytics, the other CAT partner.

“It would be a major boost to international climate cooperation. Having the US taking such strong action would reverberate across the world, and result in other countries also stepping up to adopt the kind of targets they need to make global net zero a reality.”

[1] The suggested 2030 emissions reduction range for the US is derived from global model runs of the IPCC special report on 1.5°C that distribute emission reductions across countries and sectors in a cost optimal way to limit global temperature rise to below 1.5°C by the end of the century. To represent a fair share, taking into account its responsibility and capacity, the US would have to reduce its national emissions at this pace AND support other countries in making the transition.