We have set up a framework that assesses and scores a number of indicators, where we rate various aspects of governance. This allows us to establish a common basis on which to compare climate governance across countries as well as identify areas of improvement and highlight positive developments. We have applied this framework at both a national level and on key emissions-intensive sectors of the economy. In the Philippines case we have focused on the electricity supply and transport sectors.

For the purpose and overview of this series, see our Climate Governance series main page. The methodology framework used in this assessment is here. For more detail on our methodology, see here: methodology page.

There is room for improvement in the Philippines’ political commitment to climate mitigation. The President has yet to turn the words of his Fourth State of the Nation speech --- on fast-tracking renewable energy and cutting coal usage -- into action, as well as to increase the attention he pays to climate mitigation overall.

The Philippines has played a leadership role on climate change internationally, including in securing the 1.5°C temperature limit in the Paris Agreement. However, it could bolster this position by undertaking and showcasing domestic mitigation efforts.

The Philippines has a dedicated agency - the Climate Change Commission (CCC) - and a high-level group within the executive tasked with climate mitigation. It exhibits a moderate level of effective coordination between government agencies and coverage across line ministries.

Overall, there is decent continuity in the country’s climate institutions and policies. However, the government’s current efforts to strengthen its institutional capacity to deal with disaster resilience should not be at the expense of maintaining a bespoke entity to deal with climate mitigation. The Cabinet Cluster on Climate Change Adaptation, Mitigation and Disaster Risk Reduction could be strengthened by reintroducing an explicit objective to focus on mitigation efforts into its mandate.

There is much the Philippines could do to strengthen its institutional framework to support the transition to a zero emissions society. All relevant line ministries should appoint a high-level climate change focal point with a clear mandate to pursue mitigation activities. Enhancing the coverage of climate change within line ministries will bolster the ability of the Commission to effectively coordinate climate mitigation activities, as would ensuring it has sufficient financial and human resources to support its work. More research on deep decarbonisation pathways is needed. This analysis should be regularly considered and heeded by the government.

The Philippines has made progress in establishing an enhanced transparency framework, but the nation urgently needs a defined Paris-compatible decarbonisation pathway. Work is underway to update its NDC by 2020; however, this process has not been formalised into a permanent mechanism to ratchet-up mitigation efforts.

The Philippines’ level and scope of engagement of non-state actors is positive. Climate change-related content is publicly available, and there is some effort to include stakeholders during policy development. Yet these efforts are hampered by the poor management of non-state actors’ interests. More needs to be done to ensure a just transition than simply a focus on promoting green jobs.

We analyse ten different criteria of governance under four categories that cover the key enabling factors for effective climate action. We give each a rating as outlined above (poor - neutral - advanced). The methodology framework used for this assessment is here. For more detail on our methodology in general, click the link below.

These tables from the report give an overview and analysis of the key factors of the Philippines governance to enable effective climate action. We look at the country's key institutions, strategies, targets and legislation, as well at a sectoral level for the electricity supply and transport sectors. 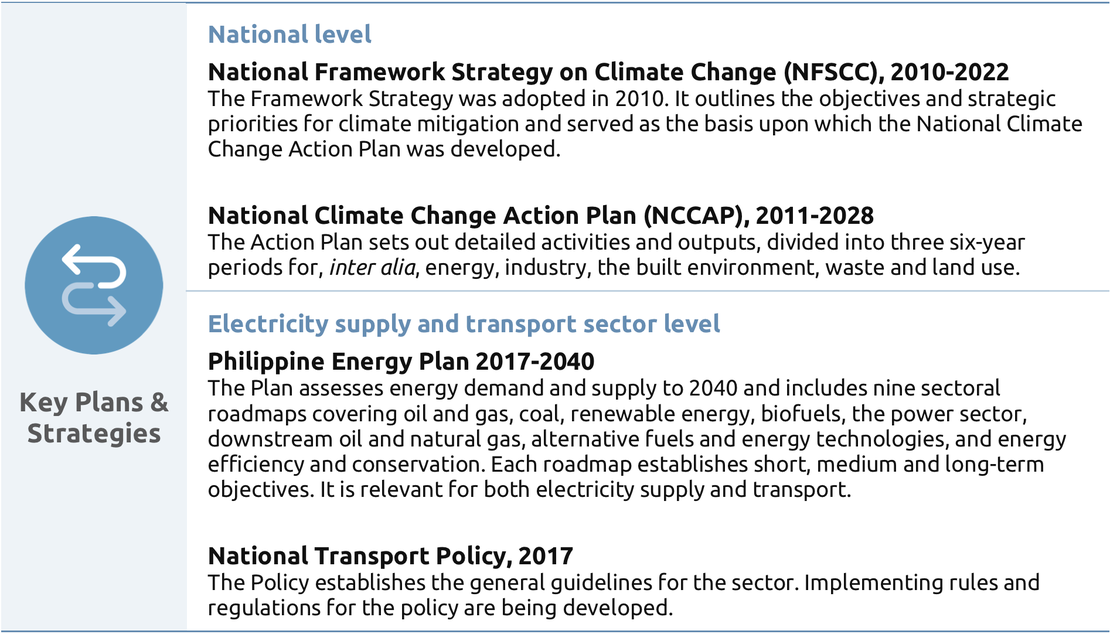 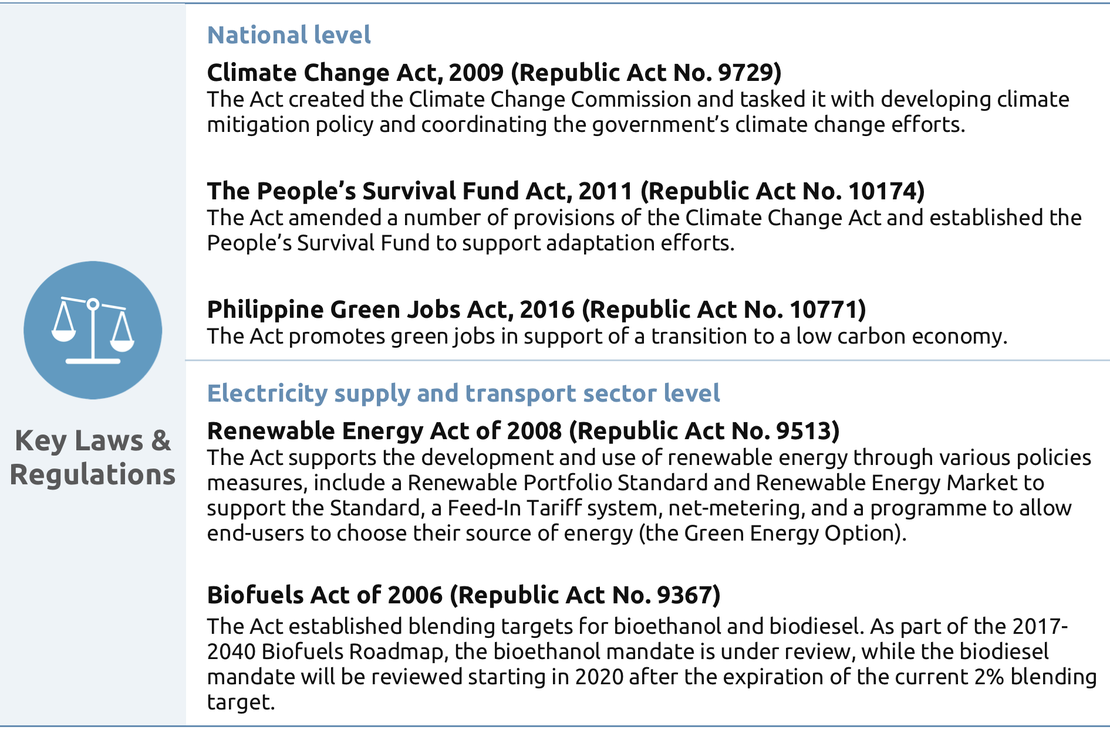 The report also assesses the readiness of the Philippines electricity supply sector and transport sector. See the report for details.