The recent wave of net zero targets has put the Paris Agreement’s 1.5°C within striking distance. The Climate Action Tracker (CAT) has calculated that global warming by 2100 could be as low as 2.1°C as a result of all the net zero pledges announced as of November 2020. 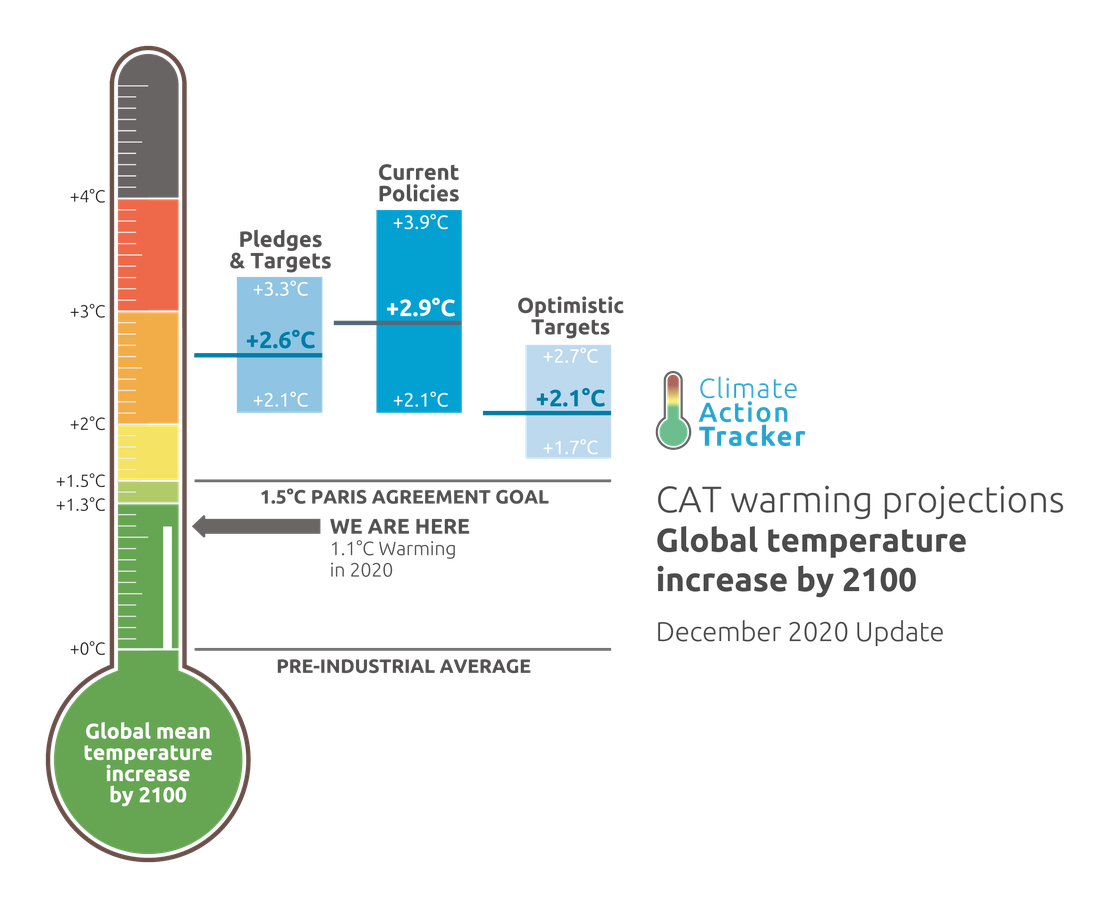 Included in our new modelling is the announcement by China in September 2020 that it intends to reach carbon neutrality before 2060, which reduces the CAT end of century warming estimate by 0.2 to 0.3°C alone. Assuming carbon neutrality in the USA by 2050, as proposed by President-Elect Biden, would reduce warming by another 0.1°C. South Africa, Japan, South Korea and Canada have also recently announced net-zero targets. In total, 127 countries responsible for around 63% of emissions are considering or have adopted net zero targets. 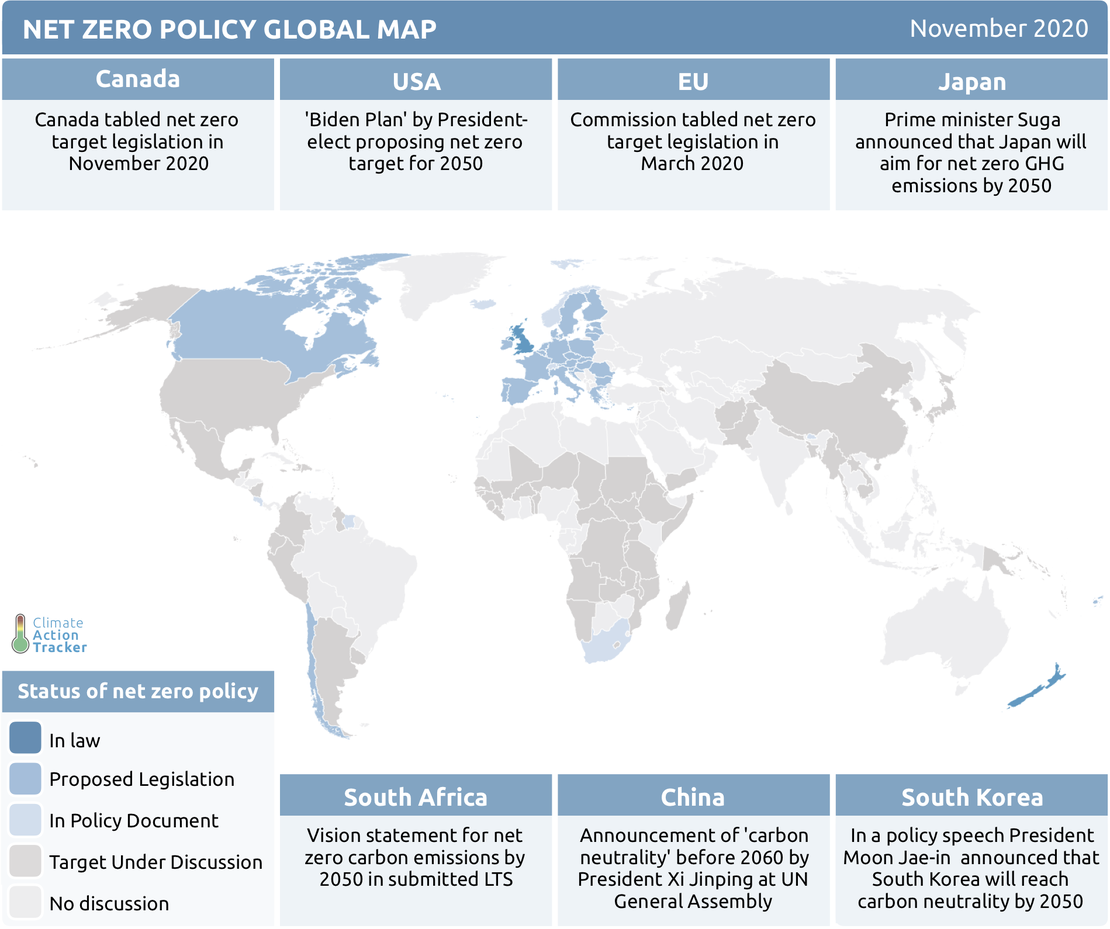 While 2050 net zero targets are commendable, governments must now adopt stronger 2030 targets (nationally determined contributions or NDCs) to deliver on their net zero goals, and close the remaining emissions gap to 1.5°C. The end of 2020 deadline to submit new and updated NDCs is fast approaching. These strengthened NDCs are critical to ensuring governments can meet their mid-century net zero targets. Governments must also develop detailed implementation plans to support these targets.

However, there remains little positive movement by governments to improve their 2030 NDC targets since Paris in 2015. As of November 2020, no large emitter had submitted a substantially updated NDC since the adoption of the Paris Agreement. Moreover, governments' current policies put them on a warming trajectory of 0.8°C higher than our optimistic net zero target assessment. 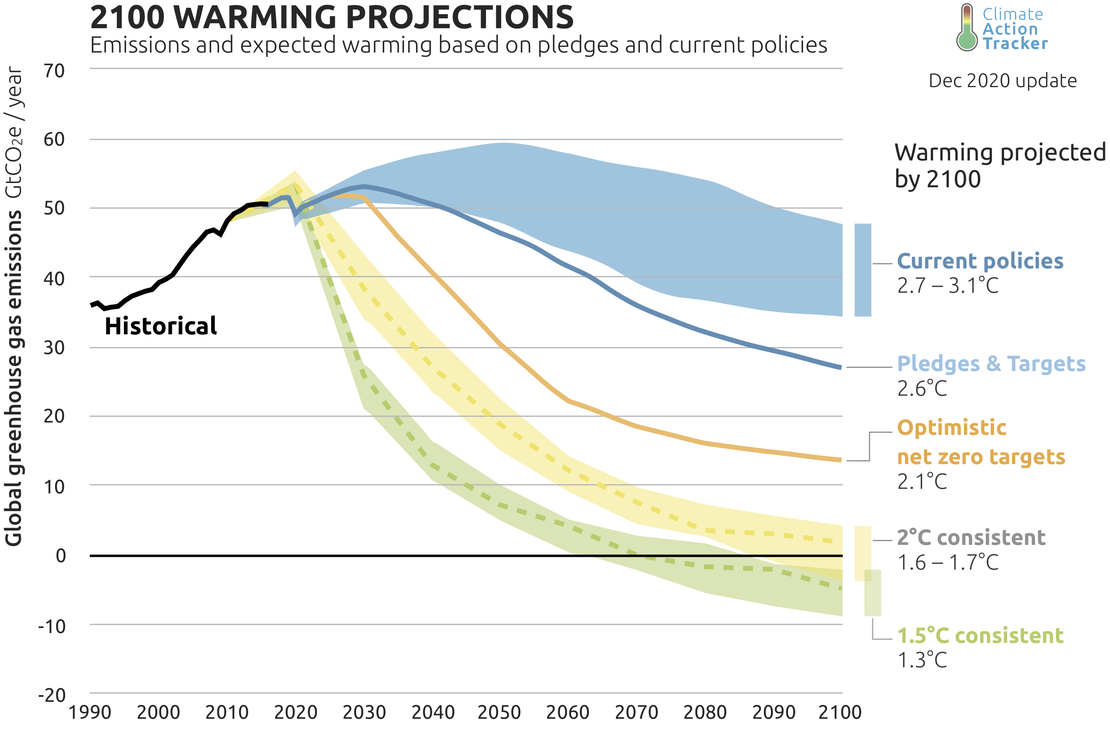 It is clear the Paris Agreement is driving climate action. On the eve of its five-year anniversary, a survey of past Climate Action Tracker assessments shows that the temperature estimates for end-of-century warming have been falling for both the targets and real-world emissions projections. 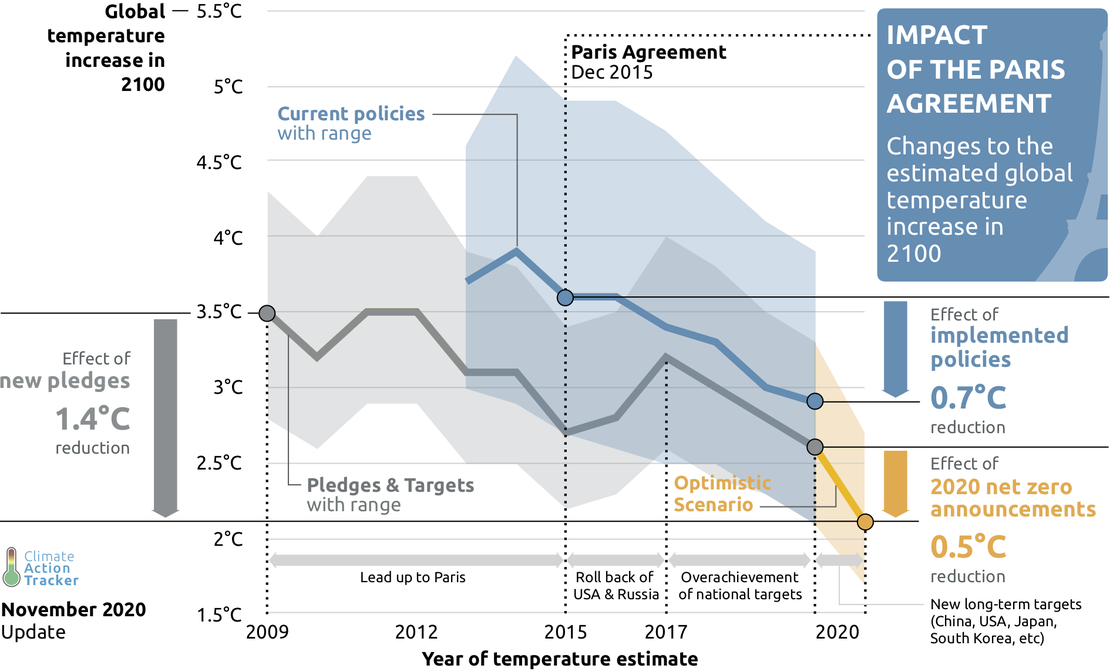 End of century warming estimates for real-world emissions have fallen by 0.7°C in the last five years. Our temperature estimate of real-world action based on all adopted national policies (‘current policies’ scenario) has substantially decreased by 0.7°C from 3.6°C in 2015 in to 2.9°C today. Implementation of new policies, increased use of renewable energy, a downturn in the use of coal and lower economic growth assumptions (both prior to and because of the pandemic) are responsible for the lion’s share of the drop.

End of century warming estimates for targets have fallen by 0.5°C due to the new net zero targets and in total by 1.4°C through Paris pledges. The Climate Action Tracker began analysing the effect of targets and pledges on warming in 2009. At that time, our estimate stood at 3.5°C. The first major improvement in this estimate occurred in the lead-up to the Paris summit in 2015, as governments began announcing their intended contributions (INDCs). By the time, the Paris Agreement was adopted, the CAT temperature estimate fell significantly to 2.7°C. Our current temperature estimate as of November 2020 is 2.6°C.

In the years between Paris and now, the estimate rose in the aftermath of the USA and Russia abandoning targets, then fell again, along with real world emission trends.