Under current pledges, the world will warm by 2.8°C by the end of the century, close to twice the limit they agreed in Paris. Governments are even further from the Paris temperature limit in terms of their real-world action, which would see the temperature rise by 3°C. An ‘optimistic’ take on real-world action including additional action that governments are planning still only limits warming to 2.8°C.

Warming estimates have fallen by 0.1-0.2°C compared to the CAT’s September 2019 update. However, the reason is largely methodological changes and data updates rather than any major scaling-up of climate action. 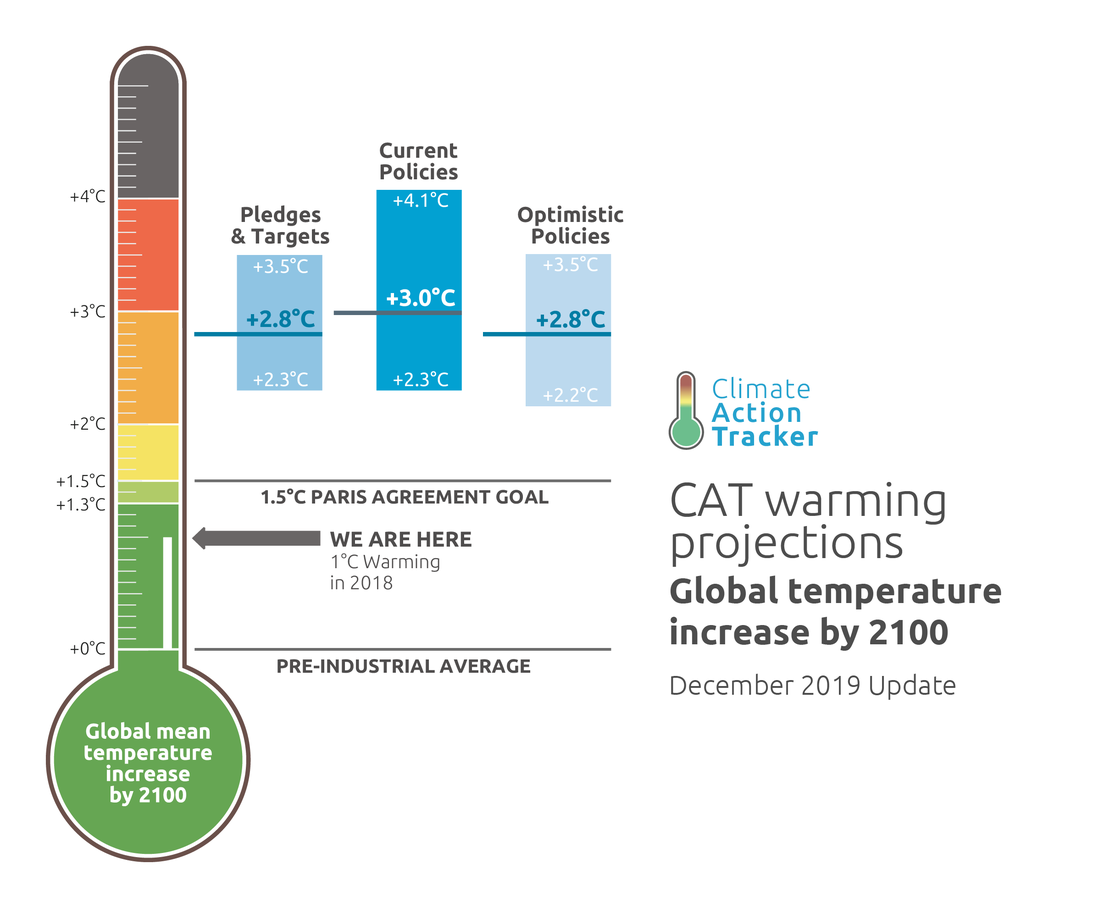 Governments need to enhance NDCs in 2020

As of December 2019, very few governments have announced updated and strengthened Paris Agreement pledges: only the Marshall Islands has submitted an updated NDC, and Chile has published a draft, which is at least a clear step forward from its current target.

In Paris, governments agreed their actions were not enough to meet the agreement’s goals and that they would enhance their climate action plans by 2020. It is worrying that governments are not stepping up, and it is irresponsible for countries to announce that they will not update their NDC by 2020.

The CAT has mapped and analysed these developments in our new “Climate Target Update Tracker”, which we will update as announcements are made.

Many governments are still firmly embracing coal even if it is more expensive than renewables. It is especially problematic in Asia, where China, Japan and South Korea are all funding coal offshore, as well as building new plants themselves. An example of the expansion is the proposed Lamu coal-fired power station in Kenya, which would be both Chinese funded and built.

The world is not tracking towards a Paris Agreement-compatible phase-out of coal. We observe a net increase of 63 GW of operating coal-fired capacity between 2015 and 2019. However, this was accompanied by a significant decrease in plans to expand the coal fleet. The coal pipeline has shrunk by nearly 75% between 2015 and 2019.

Global demand for natural gas is growing rapidly - 5% from 2017 to 2018 - and was responsible for the largest increase in CO2 emissions from fossil fuel combustion in this period (nearly two thirds). To be compatible with the Paris Agreement natural gas in power generation, without deployment of CCS, needs to peak before 2030 and be halved by 2040 below 2010 levels, with demand for gas shrinking to only a tiny part of global electricity demand by 2050.

Growth in renewables expected to soar in the next half decade

Renewable capacity growth was positive in 2018 with almost 2,400 GW installed worldwide, after doubling in the last ten years. The outlook for renewables is also positive in 2019, as renewable power capacity is projected to increase by approximately 50%, or 1,200 GW in the next five years. Most of the growth is from solar PV and onshore wind, which accounts for 60% and 25% of the additional installations respectively. Hydro will start to play a diminished but still significant role, while offshore wind capacity plans to triple.

South Africa's emissions are projected to decline for the first time; Switzerland is working to increase its already high carbon price to significantly accelerate emissions reductions. Norway, New Zealand and Germany have adopted zero emission targets for 2050; New Zealand's is now enshrined in national law, and in 2018 the EU’s emissions decreased by around 2.1%, driven mainly by a decrease in the energy sector.

Brazil’s deforestation rates are at a ten-year record high. The USA has now officially given notice that it will withdraw from the Paris Agreement and continues its rollback of climate policies. The Australian government continues to support fossil fuel interests and its emissions from fossil fuels (excluding the LULUCF sector) have increased by around 1% per year, on average, since 2014, while almost all states and territories have adopted net-zero targets. In Mexico and Argentina, government changes endanger the continuation of previously promising mitigation efforts.

The CAT has added four new countries to our list of those for which we undertake detailed mitigation assessments and rate: Kenya (2°C compatible), Germany (Highly Insufficient), United Kingdom (Insufficient) and Viet Nam (Critically Insufficient).

The conclusions of the IPCC’s Special Report on 1.5°C are clear and direct: Governments need to rapidly reduce CO2 emissions to net zero by 2050 and of all greenhouse gases by 2070, and in order to get there reduce emissions globally by 45% by 2030 from 2010 levels. It is time for governments to deliver on their promises by announcing updated - and enhanced - 2030 emission reduction targets and releasing their mid-century plans.

In September 2019, UN Secretary General António Guterres invited governments to his Climate Action Summit to announce new and improved climate commitments. More than 65 nations communicated intentions to increase their climate action, but the largest economies in the world - and the biggest emitters - stayed silent.

In this briefing for COP25 in Madrid, Spain, hosted by Chile, the CAT introduces its new Climate Target Update Tracker, updates its estimates on where country commitments and real-world action get us in terms of global warming by the end of the century.

Below is a section of highlights from our latest round of country assessments for the 36 countries the CAT covers. Here we highlight Australia, Brazil, Chile, China, the EU, Germany, India, Indonesia, Kenya, Saudi Arabia, South Africa, the United Kingdom, the United States, and Viet Nam.

Climate policy is deteriorating, as the government focuses on liquified natural gas (LNG) exports, a potential new coal-fired power station, and fails to establish effective policies to reduce emissions. Fossil fuel and other emissions from energy, industry, transport and other sectors increase by 1% a year. More than two million hectares have burned in a record early bushfire season, but the government has downplayed or denied the connection between the wildfires and drought ravaging the continent, leading to water shortages and restrictions in town and cities.

At odds with the urgent need for climate action, Brazil’s weakening of environmental institutions and budget cuts reduces its ability to regulate environmental crimes, including illegal deforestation in the Amazon region. Deforestation and resulting emissions increases have accelerated, with the 2019 dry season breaking records in both deforestation rates and forest fires.

Showing climate leadership by announcing a coal-phase out by 2040, hosting the UNFCCC COP25, and drafting a new NDC with improved ambition, but new coal development threatens decarbonisation plans.

Continues as the world’s largest consumer of coal and largest developer of renewable energy; but while fossil investments grow, renewable subsidies are being phased out. Increasing CO2 emissions from China continue to raise concerns that the progress in recent years could be reversing.

Cross-sectoral policies, emissions trend moving in right direction, but needs to be faster

“Clean Energy for all Europeans” package sets the framework for decarbonising energy and buildings sectors, but concerns arise over increasing support for natural gas development.

The new Climate and Energy Package is not enough to reach medium-term climate and energy targets. New elements, such as a coal phase-out, a carbon price in specific sectors and an overarching climate law, are positive but insufficient steps.

On track to become a global renewable energy leader

For three consecutive years, renewable energy investment topped that of fossil fuel-related power investments, and there are signs in 2019 of a marked slowdown in CO2 emissions growth. Even so, significant coal-fired capacity is planned for development.

Developed plans to increase both its renewable capacity share and number of electric vehicles, but massive coal pipeline puts a question mark on the positive outcomes of such targets.

On track to overachieve NDC through ambitious electricity sector plans

Energy future is at a crossroads, with strong political support for clean energy at odds with plans to build the first two coal-fired power plants in East Africa; at least one would be Chinese-funded and built.

Ambitious new renewable energy target but progress yet to be seen

Development of non-fossil energy is a key component of the “Vision 2030” strategy to reform an oil- dependent economy, but building of renewable and nuclear capacity has stalled.

Progress in one of the coal-heaviest economies

Updated electricity sector planning and economic slow-down has caused emissions to decrease. A shift in energy policy signals the decommissioning of the majority of coal plants by 2050.

Declared Climate Emergency, became first industrialised country to legislate a new net-zero emissions by 2050 target, is phasing out coal by 2023, but is in danger of missing medium-term targets including 2030. With the Presidency of COP26 in Glasgow in 2020, it's important for the government to ratchet up its climate policies to match need for ambitious reductions by 2030.

Despite decision to withdraw from the Paris Agreement and other rollbacks, the US power sector looks set to overachieve the emissions reduction goals of the repealed Clean Power Plan.

Viet Nam is highly vulnerable to the impacts of climate change, yet its fast-growing economy is dominated by fossil fuels, a trend that if continued will result in emissions far outside Paris Agreement compatible levels. The nation has the potential to be a leader in renewable energy - but only if it drops coal expansion plans and implements an ambitious NDC update in 2020.