Against a backdrop of rising emissions from deforestation, a record-breaking year for forest fires in the Amazon, and increasing international scrutiny over Brazil’s climate action, Brazil has submitted an updated Paris Agreement NDC that effectively weakens its already insufficient climate action targets for 2025 and 2030.

Brazil’s targets to reduce emissions by 37% and 43% from 2005 levels by 2025 and 2030 respectively are unchanged on paper, but an increase in the base year emissions used as a reference means that Brazil can continue to increase its emissions and still meet its targets.

Instead of enhancing its targets to accommodate changes in its base year emissions, the Bolsonaro administration has used the updated inventory to weaken its targets. This leaves Brazil free to continue increasing emissions and still meets its unchanged targets to reduce emissions by 37% and 43% from 2005 levels by 2025 and 2030 respectively. As a result, Brazil’s emissions in 2030 under the new target could be 27% higher than they were when it ratified the Paris Agreement in 2016. The government has also dropped all reference to stopping illegal deforestation, restoring forests and enhancing native forest management.

The new NDC targets fall into the CAT’s ‘Highly Insufficient’ category. Backsliding on emissions reduction targets in this way breaks the Paris Agreement’s requirement that each successive NDC should represent a progression beyond the current one.

On 9 December 2020, Brazil submitted its updated NDC, confirming its existing target for the year 2025 (a 37% reduction in emissions below 2005 levels), and committing to its previously indicative target for 2030 (a 43% reduction in emissions from 2005 levels). The submission also emphasises the NDC’s compatibility with an “indicative objective of reaching climate neutrality in 2060”, but with the caveat that Brazil’s long-term strategy is conditional on the receipt of financial transfers.

Brazil’s updated NDC appears to be simply a reconfirmation of existing targets, albeit with a shift in its 2030 target from “indicative” to “committed”. However, an update in the base year emissions in Brazil’s greenhouse gas inventory has led to a substantial weakening of both targets. While the former NDC had translated both emissions reduction targets into absolute emissions in 2025 and 2030, the updated NDC does not provide such a translation. Instead, it specifies that the base year emissions level can be found in Brazil’s Third National Communication. Our calculations show that the change in base year emissions data raises target emissions in 2025 and 2030 by over 400 MtCO2eq, pushing them well above our current policy projections.

Rather than enhancing Brazil’s NDC to take changes in the base year into account, the current administration has used its inventory update weaken its targets. While emission estimates for the past have changed, the situation for the future has not. Still the target refers to the new historical emission estimate and is therefore effectively weakened. This gives the government ample room to raise its emissions over the next five years and achieve their target level in 2030, excluding LULUCF, that is about 130% higher than 1990 levels, and 27% higher than they were when Brazil ratified the Paris Agreement in 2016.

Against a backdrop of rising emissions from deforestation, the lack of any specific mitigation targets for the land sector is another step backwards. Brazil’s previous NDC set a target for stopping illegal deforestation and restoring forests and enhancing native forest management, but these are no longer listed in the NDC update.

A positive development in Brazil’s NDC submission is the inclusion of an objective for climate neutrality in 2060. If this target were to be confirmed as a long-term strategy, Brazil would join the ranks of major emitters that have pledged to achieve net zero emissions around the middle of the century. However, Brazil’s net zero objective is conditional on the receipt of financial transfers. Specifically, the NDC states that an earlier date for net zero of 2050 may be possible if the Paris Agreement’s market mechanisms function properly. It is unclear exactly what is meant by a “properly functioning market”, but the Brazilian government has been widely reported to be pushing for market mechanism rules under the Paris Agreement that many other countries deem unacceptable.

Beyond a functioning market mechanism, Brazil also calls for receiving US$10 billion a year from 2021 to address its climate change-related challenges, including the conservation of its native vegetation, in particular the rainforest. However, it is not clear whether - and to what extent - Brazil’s medium-term targets are conditional on receiving such finance. With market trends already driving increased uptake of renewable energy, a sizeable portion of Brazil’s mitigation needs should be affordable domestically, with international climate finance used to support mitigation in harder-to-abate sectors.

It is difficult to assess the strength of Brazil’s indicative climate neutrality target without information on the pace of emissions reductions and the projected contribution of LULUCF. A proposal for net zero emissions by 2060 published by the Brazil Forum for Climate change in December 2018 included a substantial LULUCF sink of over 1 GtCO2e, requiring a U-turn in Brazil’s land sector policies, but allowed considerable emissions from agriculture, industry, transport and other sectors to remain in 2060. Limiting warming to 1.5°C would require rapid emissions reductions across all sectors.

The greenhouse gas scope of the 2060 objective adds to the uncertainty. The NDC refers to both “climate neutrality”, which we consider as meaning net zero greenhouse gas emissions, and “carbon neutrality”, which usually refers specifically to CO2 emissions. A carbon neutrality target would be much weaker than a net zero emissions target, particularly in the case of Brazil, where non-CO2 emissions contribute over half of current emissions excluding LULUCF. The Brazilian government will need to follow up its announcement of the climate neutrality objective with a clear implementation plan and ambitious interim targets to shift Brazil onto a Paris Agreement compatible pathway. 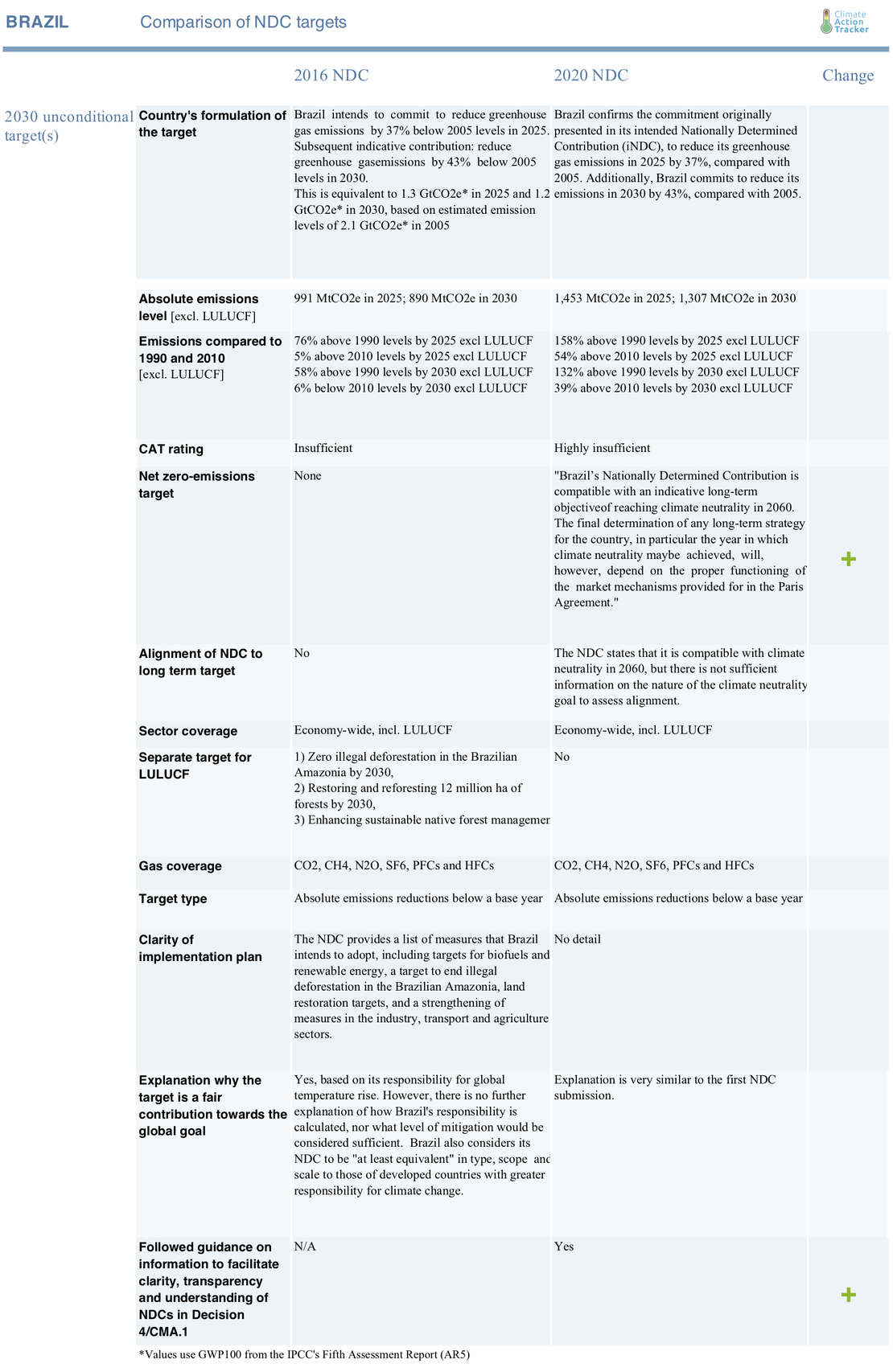