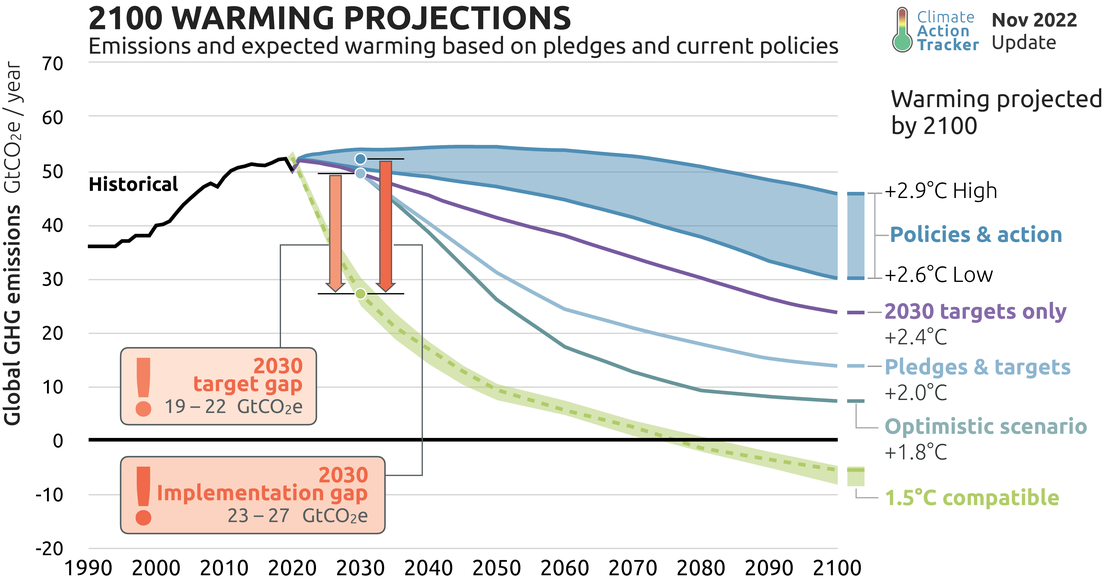 We also ran an “optimistic” targets scenario analysing the effect of net zero emissions targets of about 140 countries that are adopted or under discussion. Even under the optimistic assumption that governments will achieve these targets, the median warming estimate is only limited to level of 1.8°C. It must be emphasised that our ‘optimistic’ assessment of end-of-century median warming of about 1.8°C is not Paris Agreement compatible and that warming higher that 2°C cannot be ruled out.

There remains a substantial gap between what governments have promised to do and the total level of actions they have undertaken to date. Furthermore, both the current policy and pledge trajectories lie well above emissions pathways consistent with the Paris Agreement long-term temperature goal.

Evaluating progress towards the Paris Agreement

Limiting warming to 1.5°C above pre-industrial levels means that the greenhouse gas emissions need to be reduced rapidly in the coming years, about halved by 2030, and brought to zero soon after around mid-century .

The CAT evaluates progress towards this global goal by quantifying the aggregate effects of current policies and the pledges and targets put forward by countries, and compares these with the emissions levels consistent over time with the 1.5°C limit using the MAGICC climate model (see Methodology section).

The CAT determines a 1.5°C compatible benchmark using pathways from the IPCC AR6 pathways that limit warming to 1.5°C with no or low overshoot, and that are compatible with reaching net zero greenhouse gas emissions in the second half of this century, consistent with the Paris Agreement’s Articles 2.1 and 4.1. Reaching net-zero global greenhouse gas emissions in the second half of the century is important to align with Article 4.1 of the Paris Agreement and reduce climate change impacts. Pathways that achieve this in the IPCC AR6 fall in the IPCC's "C1a" category of pathways.

BECCS and fossil CCS are technologies that are still at an early stage of development, and the feasibility of large-scale deployment is very unclear. In addition, BECCS (bioenergy with CCS) and carbon sequestration via afforestation/reforestation CDR can have significant negative impacts if deployed at large scales, such as competition with food production, large-scale water and fertiliser demands and biodiversity loss (Heck et al, 2018).

Pathways with lower reliance on CCS and CDR generally reduce emissions faster than those which deploy large amounts of these technologies (Grant et al, 2021a, 2021b), and so by selecting for pathways with limited CCS/CDR deployment consistent with sustainability limits identified by the IPCC, we see faster emissions reductions out to 2030. The currently used sustainability criteria are:

To give a better sample of scenarios relevant to the period to pre-2050 the CAT also considers pathways in the IPCC AR6 C1b category that do not reach net zero GHGs at a global level by 2100 but that show similar or faster emissions cuts over the next few decades to the C1a set. Many of the C1b pathways display faster decarbonisation in the 2020-2050 period because they explore how we could limit warming to 1.5°C without achieving net-negative CO2 emissions (Riahi et al, 2021). Without this possibility, emissions need to fall even faster in the 2020s.

Many of the C1b pathways (16 out of 24 selected C1b pathways) do not achieve net zero GHGs because of choices made in their design to prevent CO2 emissions becoming net negative (Riahi et al 2021). These pathways provide valuable information on the near-term emissions reductions required to minimise carbon budget overshoot and avoid reliance on net-negative CO2 emissions, but do not provide information on the long-term energy system configurations required to reach net-zero GHGs.

This represents a precautionary approach, where these additional pathways help ensure that our final 1.5°C compatible pathway is not overly reliant on achieving negative emissions (the feasibility of achieving which is challenging, as argued above). Post-2050, these C1b pathways are not included in the CAT’s 1.5°C compatible benchmark, as they do not achieve net-zero greenhouse gas emissions as required by the Paris Agreement.

1 | 2.7°C is the median of the combined low and high ends of current policy projections.

2 | In the term NDC, we also include the “Intended” Nationally Determined Contributions of governments who have not yet ratified the Paris Agreement. For those countries, who are overachieving their NDCs, we take the upper end of their current policy projections as the limit. We project the global effects beyond the NDC timeframes assuming policies of a similar strength are implemented through to the end of the century.

3 | The uncertainty range for pledges on the CAT thermometer (1.6-2.5°C) originates from carbon-cycle and climate modelling using the MAGICC model around pledges and targets scenario. Here we give the 68% range; that is the 16th and 84th percentiles of the probability distribution. If the more ambitious end of pledge ranges were reached, warming could be limited to a median of 1.8°C. This includes the upper end of country NDCs where a reduction range is specified and mitigation commitments that are conditional on finance.