If all governments achieve their largely insufficient climate targets, the world will see 3.0˚C of warming by 2100, twice the 1.5˚C limit they agreed in Paris three years ago, according to the Climate Action Tracker’s annual update, delivered today at the climate talks in Katowice, Poland.

However, there has been some progress on the ground since Paris, in a few countries, said the CAT, a consortium of three research organisation that has been calculating the projected warming from government pledges since 2009. 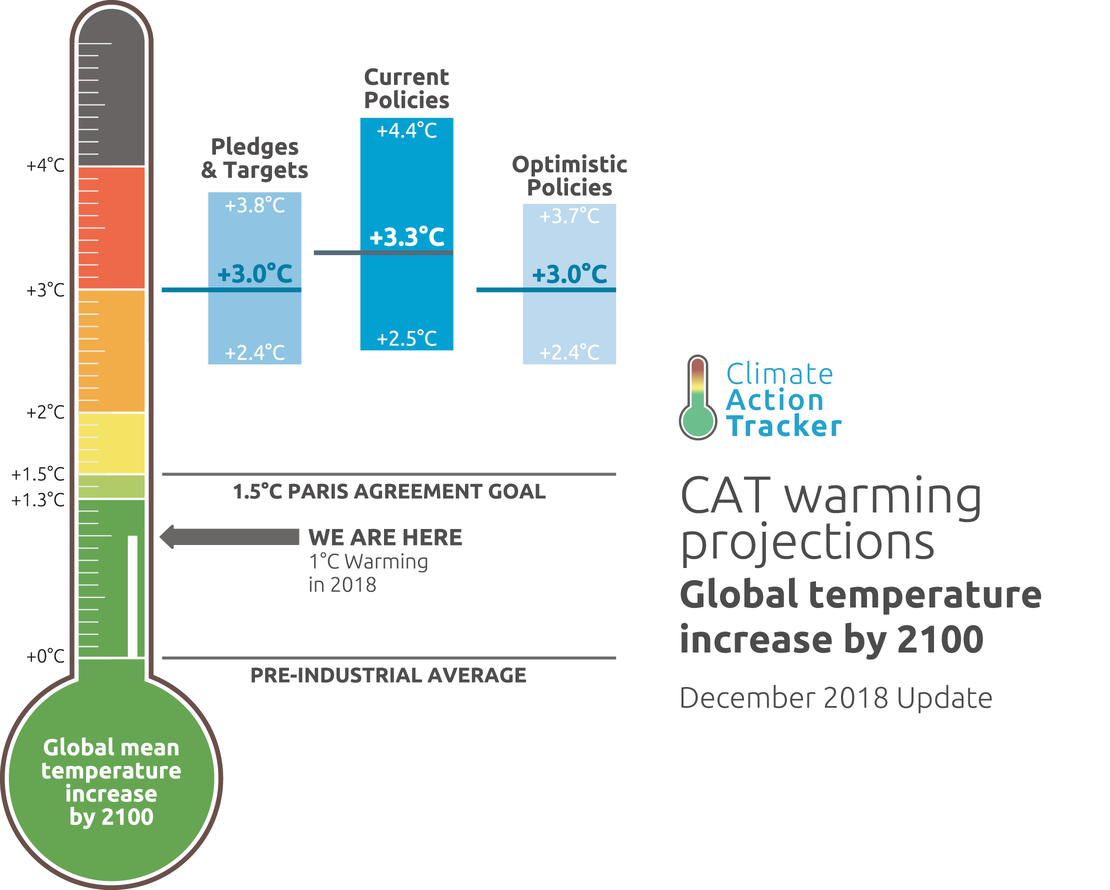 Government policies lag behind their pledges, which would lead to warming of 3.3˚C. If governments were to implement the planned or additional policies they have in the pipeline, warming would also be limited to 3.0°C by 2100.

“Two months ago the world received a strong message from the scientific community - that it’s possible to keep warming to 1.5˚C. But we have yet to see this translate into action in terms of what governments are prepared to put on the table,” said Climate Analytics CEO Bill Hare.

For this year’s update the CAT has examined how emissions projections have shifted since Paris, and has detected real movement on the ground, with Argentina, Canada, Chile, Costa Rica, Ethiopia, the EU, India and Morocco taking significant steps in the right direction, and with other countries also taking action.

“We are seeing a stirring of new climate policies in the real world: if this were extended and scaled up, these combined efforts could actually begin to bend the emissions curve,” said Yvonne Deng of Ecofys, a Navigant company.

“But there are some governments delaying global progress: Australia, Brazil, Indonesia, Russia, the UAE and the US, and many of these countries are beginning to see the reality of climate change impacts.”

In other parts of the world, climate action has been mixed over the past year. Countries like Norway and Costa Rica are forging ahead with electrifying their transportation and renewable energy, but China’s emissions worryingly rose again for a second year running. Brazil’s elections brought global concern.

“We have seen encouraging policy developments with several countries publishing, adopting or reinforcing energy or electricity sector roadmaps. With the prices for renewables dropping roughly a third since Paris, both South Africa and Chile are mapping out strategies to address coal, and renewables are taking off in India,” said Niklas Höhne of NewClimate Institute.