This policy brief discusses economy-wide and sector-level benchmarks in 2030 and beyond for Japan to be consistent with the Paris Agreement’s long-term 1.5°C warming limit, based on recent analyses by the Climate Action Tracker and its member organisations, NewClimate Institute and Climate Analytics. The benchmarks presented in this brief are set in such a way that the world would not have to rely excessively on unproven negative emission technologies in the second half of this century. 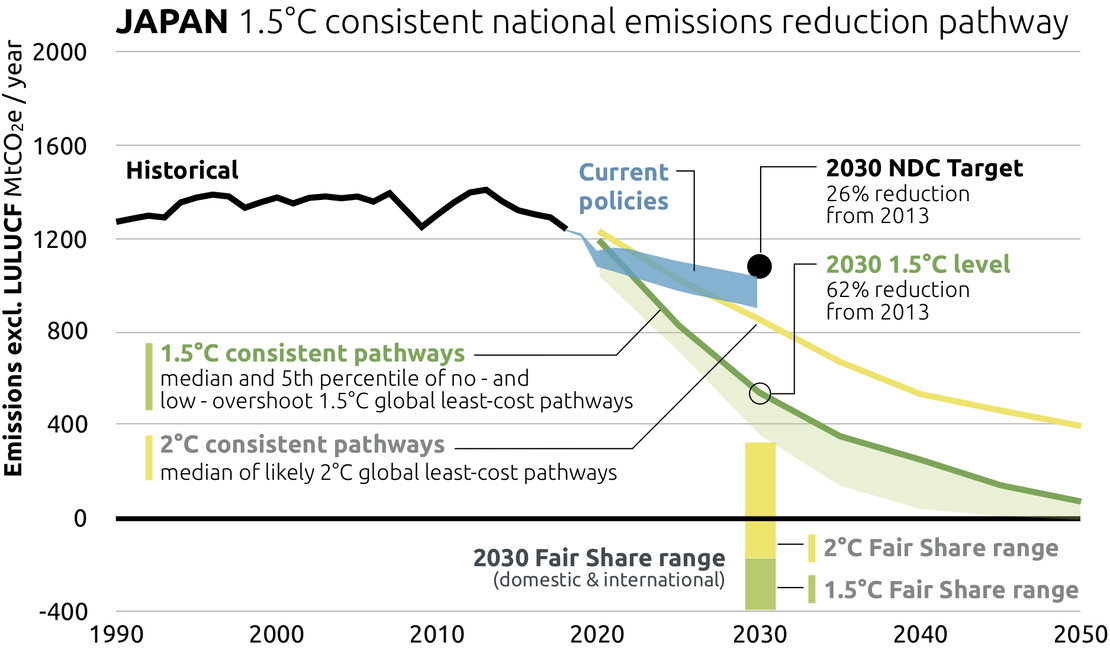 On an economy-wide level, we show that for Japan, a domestic greenhouse gas (GHG) reduction of more than 60% below 2013 levels by 2030 would be 1.5°C-consistent. While this is a challenging benchmark, the analysis of mitigation options and scenarios presented in this brief shows how this could be achieved. It is also in line with what would be necessary at a global level to be on a pathway consistent with 1.5°C. It is therefore essential for Japan to consider this range throughout the 2030 Paris Agreement target (Nationally Determined Contribution - or NDC) revision process.

On a sectoral level, transformational changes need to take place in all sectors by 2030. In the power sector, Japan would need to phase out unabated coal-fired power plants by 2030 and increase electricity generation from renewables to about 60% or more to avoid reliance on nuclear or fossil fuels with carbon capture, utilisation and storage (CCUS), and to increase its chance of achieving 100% renewable energy by 2050. It is equally important for Japan to drastically strengthen efforts to reduce energy demand by, for example, energy efficiency, energy service demand through infrastructural changes, and (induced) behavioural changes.

Electrification of end-use sectors is an additional key strategy. While this may lead to higher electricity generation, there are also additional options to further integrate variable renewable energy. Green (renewable energy-based) hydrogen will become another key to decarbonisation in a number of industrial processes, or some of the heavy-duty transport and aviation, where direct electrification is not viable. It is crucial, however, that the hydrogen consumed is produced from renewables and deployed only where alternatives are not available.

We stress that it is most important to deploy existing commercial technologies that are considered essential for 2050 net zero (e.g. existing wind – including offshore wind – and solar PV technologies, zero energy buildings and houses (ZEB/ZEH), electric vehicles (EVs)) as much as possible by 2030. Additional investment into the development of innovative technologies, as laid out in the Green Growth Strategy of December 2020, will facilitate Japan achieving net zero by 2050.