While Indonesian President Joko Widodo is showing some commitment to act upon climate change on the international stage, his government’s policies do not support his statements. The rolling back of existing climate policies, notably through the enactment of the omnibus law on job creation or the revision of the law on Mineral and Coal Mining (Minerba), highlight a lack of political commitment, accountability and trustworthiness for transition-related policies towards net zero emissions.

The Ministry of Environment and Forestry hosts the Directorate General of Climate Change, the official focal point of climate change policy planning but it has limited influence on climate action and sectoral plans as line ministries oftentimes act independently.

Indonesia’s national planning agency, Bappenas, coordinates planning and policy development amongst ministries as well as amongst provinces Notably, Bappenas has translated the national climate mitigation target into sector-level mid-term targets and policies collectively reaching an emissions reduction of more than 27%, and pursues the development of Regional Low-Carbon Development Plans (RPRKD).

Despite coordination efforts, the transition to net zero emissions is not sufficiently considered in line with ministries and current policies more prominently encourage deforestation, most notably through the palm oil industry, as well as the significant expansion of coal both for export and domestic consumption. Despite the existing knowledge infrastructure, the government lags on the consideration of the outcomes of technical analyses, suggesting that decisions are politically-driven rather than informed by country-specific technical evidence.

Indonesia has put in place key climate legislation as early as 2007. The Directorate General of Climate Change submitted an updated NDC to the UNFCCC but did not increase the ambition of its climate target, thus disregarding the ratchet-up mechanism of the Paris Agreement.

The Directorate General of Climate Change also submitted a Long-term low greenhouse gas emissions development strategy (LTS) in parallel to the updated NDC. The most ambitious pathway of the LTS, the Paris Agreement compatible emissions pathway, would lead to net zero emissions by ‘2060 or sooner’. However, the government has not officially endorsed that pathway nor a net zero target and the proposed pathway appears to ignore the evidence from Bappenas that an emissions reduction pathway leading to net zero emissions by 2045 would be economically and socially more beneficial to the country.

There are mixed signals on the level and scope of engagement with stakeholders, as a fifth of the population does not believe in climate change but experts and civil society advocate for more ambitious climate action. The government has engaged with non-state actors to develop climate plans, but the extent to which stakeholders are represented in these processes and influence policy-making is unclear.

Indonesia has no formal strategy or body to ensure an economy-wide just transition. For example, Indonesia fails to consider a shift away from fossil fuel production. Stakeholders at risk from the transition, such as the coal and palm oil industry, have been able to influence the regulatory framework in their favour and block ambitious climate policies. Only recently, stakeholders benefitting from the transition have been able to marginally influence climate policies, reflected by the government’s announcement to stop building new coal power plants as of 2023 and PLN’s announcement it would gradually phase out coal power towards net zero emissions by 2060.

This said, we see positive developments on policy processes. The Indonesian government and in particular the national planning agency, Bappenas, have taken first steps by developing country-specific and science-based technical analysis to guide the transition towards net zero emissions.

These tables from the report give an overview and analysis of the key factors of Indonesia's governance to enable effective climate action. We look at the country's key institutions, strategies, targets and legislation. 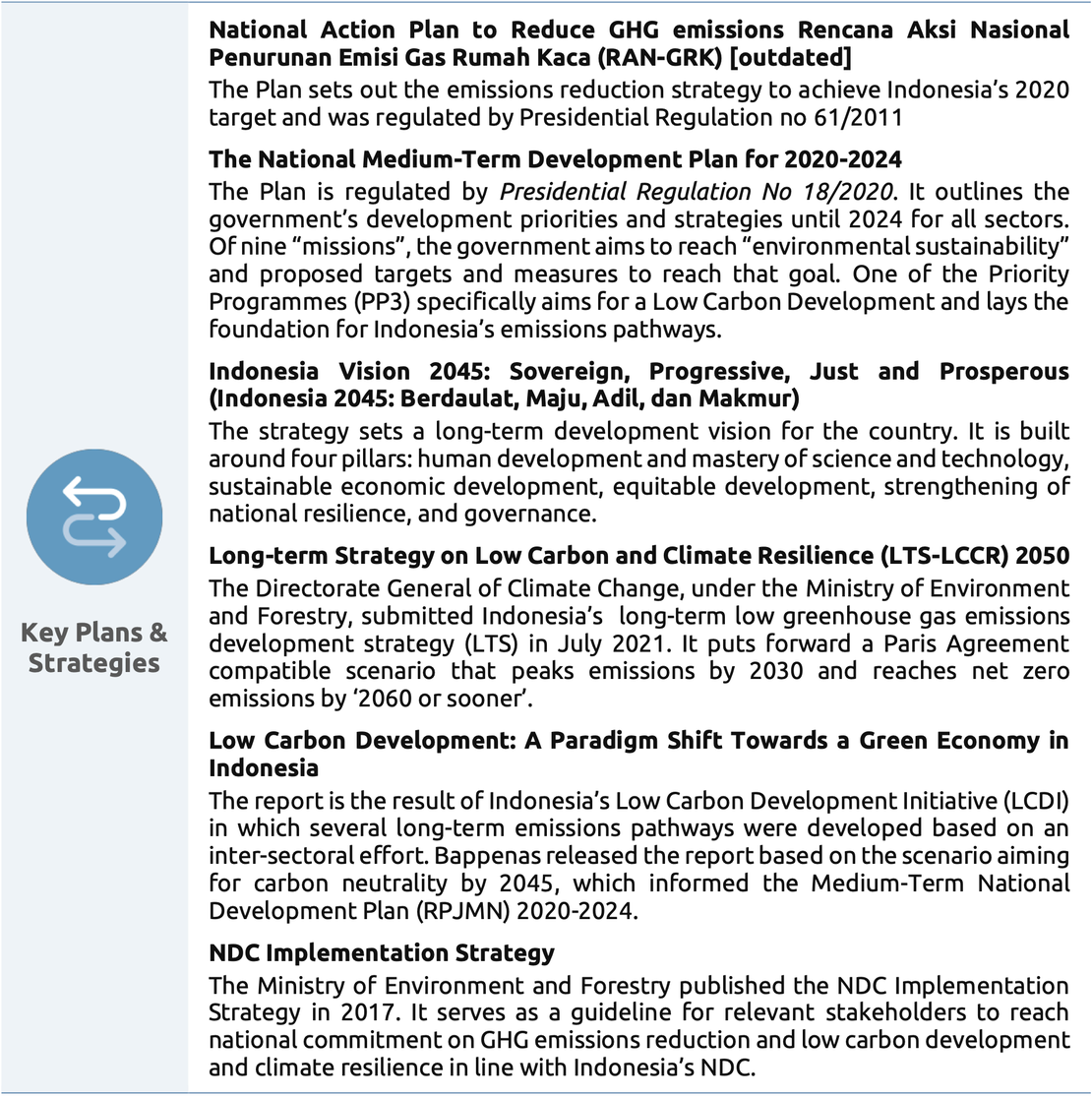 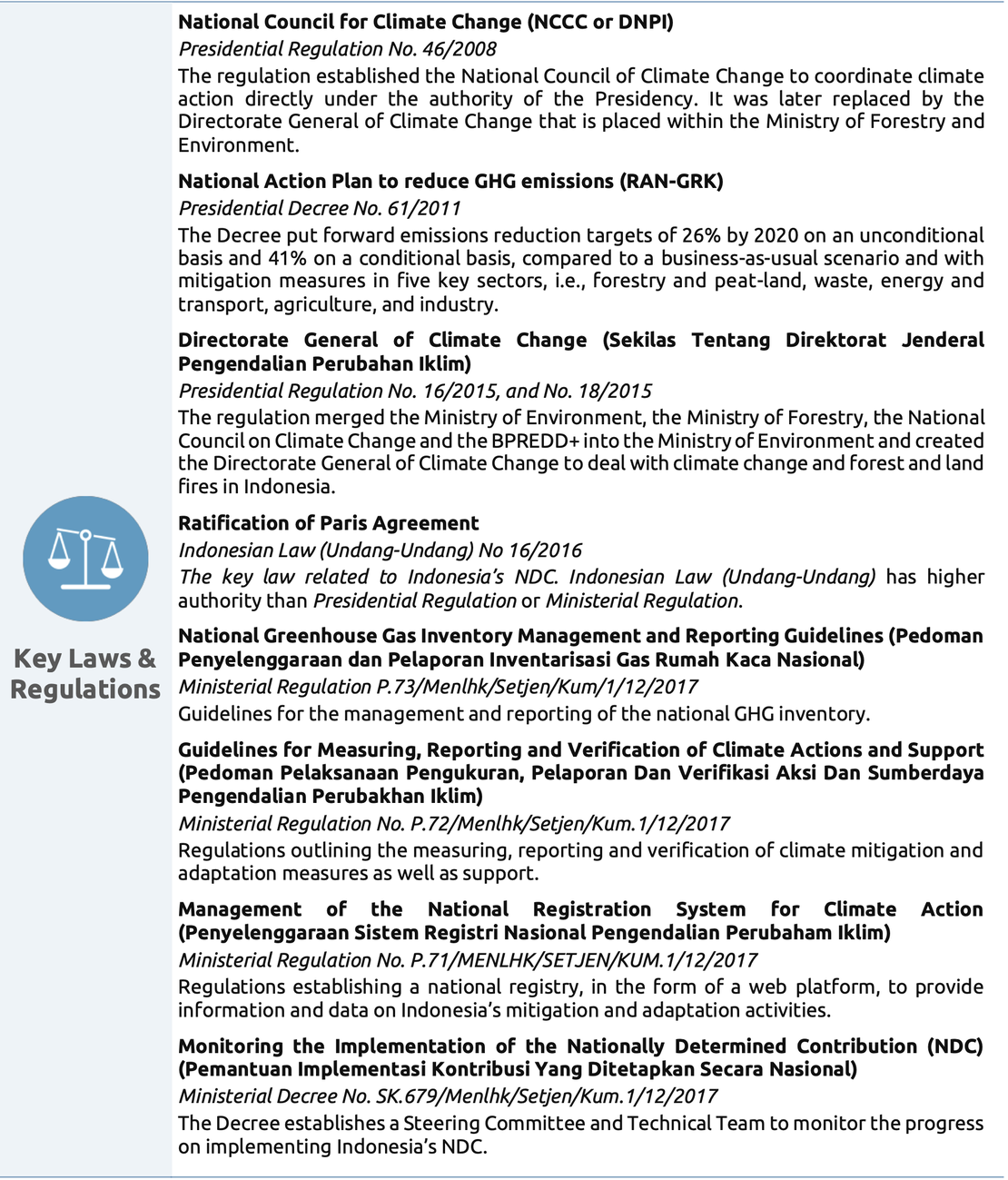 Our 2019 assessment of Indonesia's climate governance is available here.