For the purpose and overview of this series, see our Climate Governance series main page. The methodology framework used for this South Africa assessment is here. For more detail on our methodology, see here: methodology page.

South Africa's national political commitment towards ambitious climate mitigation is visible but leaves room for improvement. In particular, positive developments can be seen in the leadership of President Ramaphosa and his government, with the political discourse mainly focusing on a Just Transition.

There have been no setbacks in climate policy; on the contrary, new climate laws and policies have recently been launched, although some have been delayed for many years. Overall, both the government and other political actors (i.e. within political parties), could make the transition to a zero-emissions society a higher priority. First steps in the right direction have been taken, for example with the submission of the country’s 2050 Low-Emission Development Strategy (LEDS) to the United Nations Framework Convention on Climate Change’s Secretariat.

South Africa’s institutional framework for climate mitigation is strengthening, although there are key areas that need improvement. While vertical and horizontal coordination structures are in place and there is some mainstreaming of climate policies, sectoral policy planning and overarching national strategies can be better aligned. Despite limited human resources and an insufficient budget, the climate change lead agency has developed and implemented climate policies well.

In terms of policy development, implementation and review processes, South Africa has been showing signs of progress. While the country’s Low-Emission Development Strategy formulates the goal of net zero emissions by 2050, the goal is not yet enshrined in law, and current policy measures need to be strengthened to achieve the target. The nation is well on the way to developing a functioning transparency framework; however, existing review functionality is limited, and the system is not yet fully operational. The Paris Agreement target - or NDC - update planned for 2021 will reveal whether South Africa will increase its climate ambition in the short to medium-term.

South Africa encourages broad stakeholder buy-in through its participatory processes and undertakes good efforts to ensure a Just Transition. Consultative policymaking has been a strong part of the political culture in South Africa. However, government efforts to inform the public about the climate crisis could be increased to reach a broader population and strengthen public support for the transition to a zero-emissions society. While climate change content is available and robust, non-state actors on different sides of the spectrum have all been able to drive their respective agendas. Large industries, in particular, are currently exerting their influence, although there are signs that recent developments, such as an increasing cost-competitiveness of renewables, may align interest with a transition by accelerating decarbonisation of the power sector.

One of the most notable developments since the CAT’s last assessment of South Africa’s climate governance was the submission of the country’s Low Emission Development Strategy (LEDS) to the UNFCCC, which sets the goal of net-zero emissions by 2050 and the establishment of the Presidential Climate Change Coordination Commission (PCCCC). Further, President Ramaphosa indicated that South Africa will submit an updated and more ambitious NDC in 2021. COVID-19 - and the strict lockdown measures imposed by the Government in response to the pandemic - severely impacted the South African economy. Initial proposals by the South African government for economic recovery indicate a focus on carbon-intensive investments instead of prioritising a ‘green’ recovery (Climate Action Tracker, 2020).1

1 The analysis for this report was completed in October 2020.

We analyse a number of different criteria of governance under four categories that cover the key enabling factors for effective climate action. We give each a rating as outlined above (very poor - poor - neutral - acceptable - advanced). The methodology framework used for this South Africa assessment is here. For more detail on our methodology in general, click the link below.

These tables from the report give an overview and analysis of the key factors of South Africa's governance to enable effective climate action. We have looked at the country's key institutions, strategies, targets and legislation. 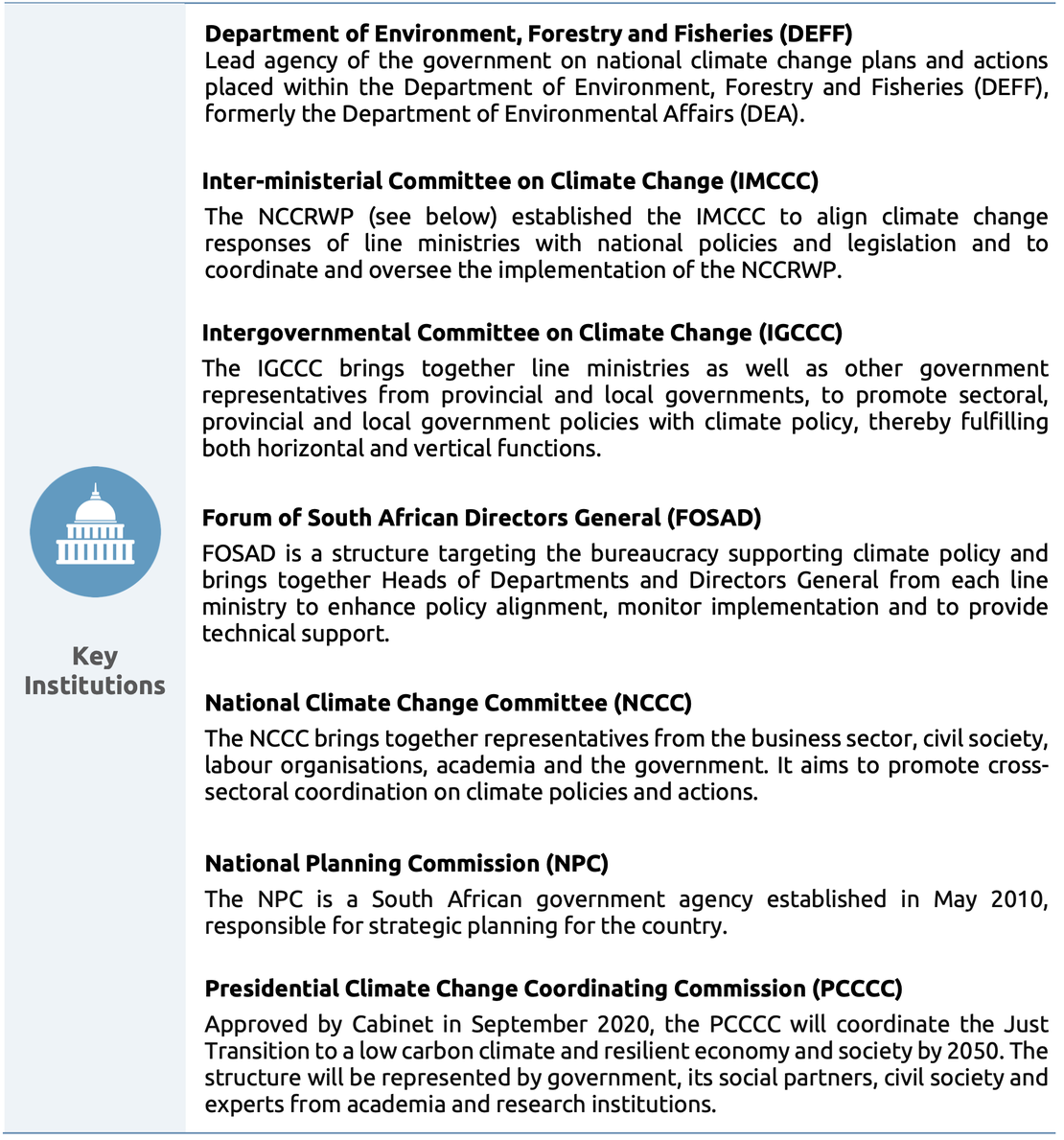 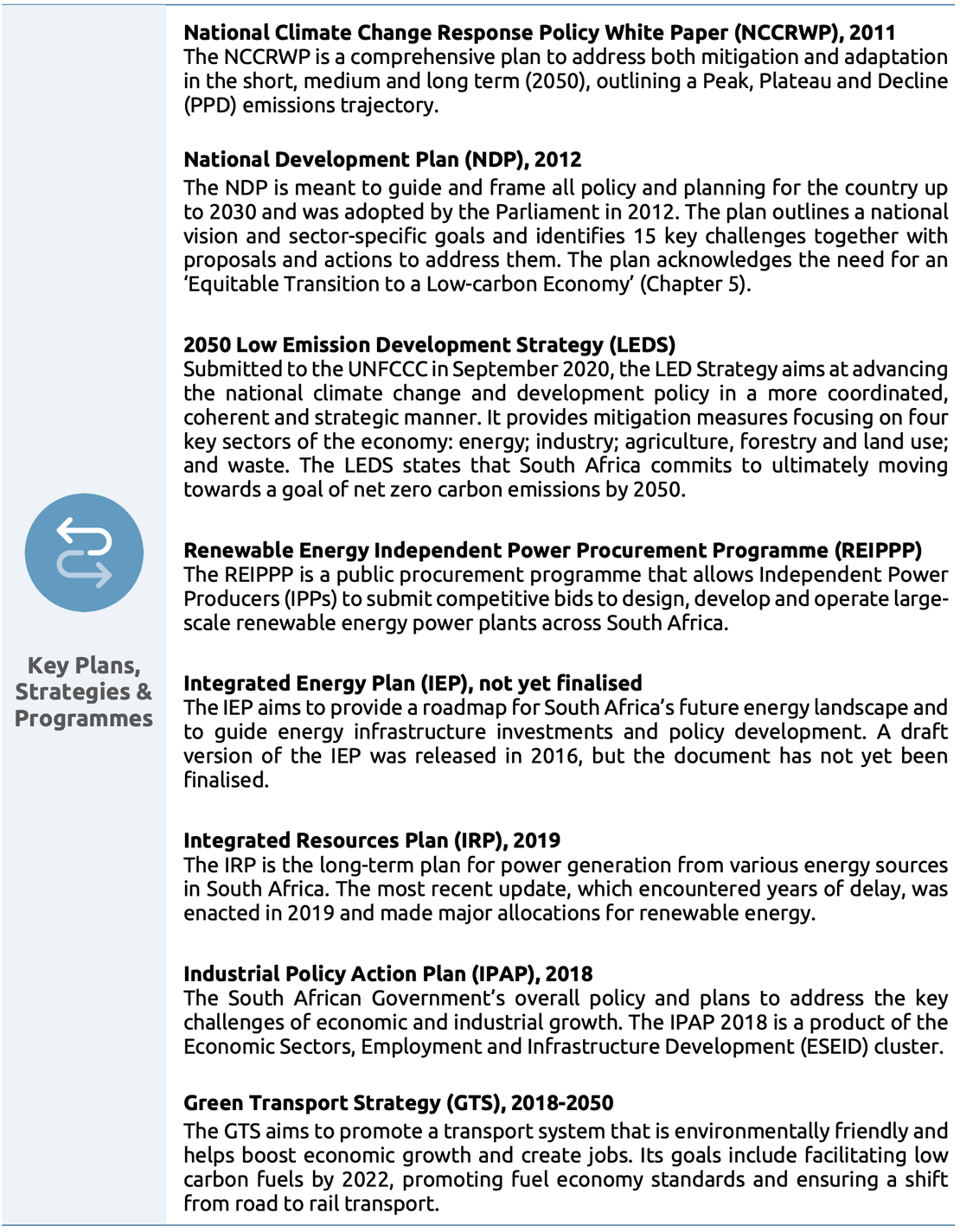 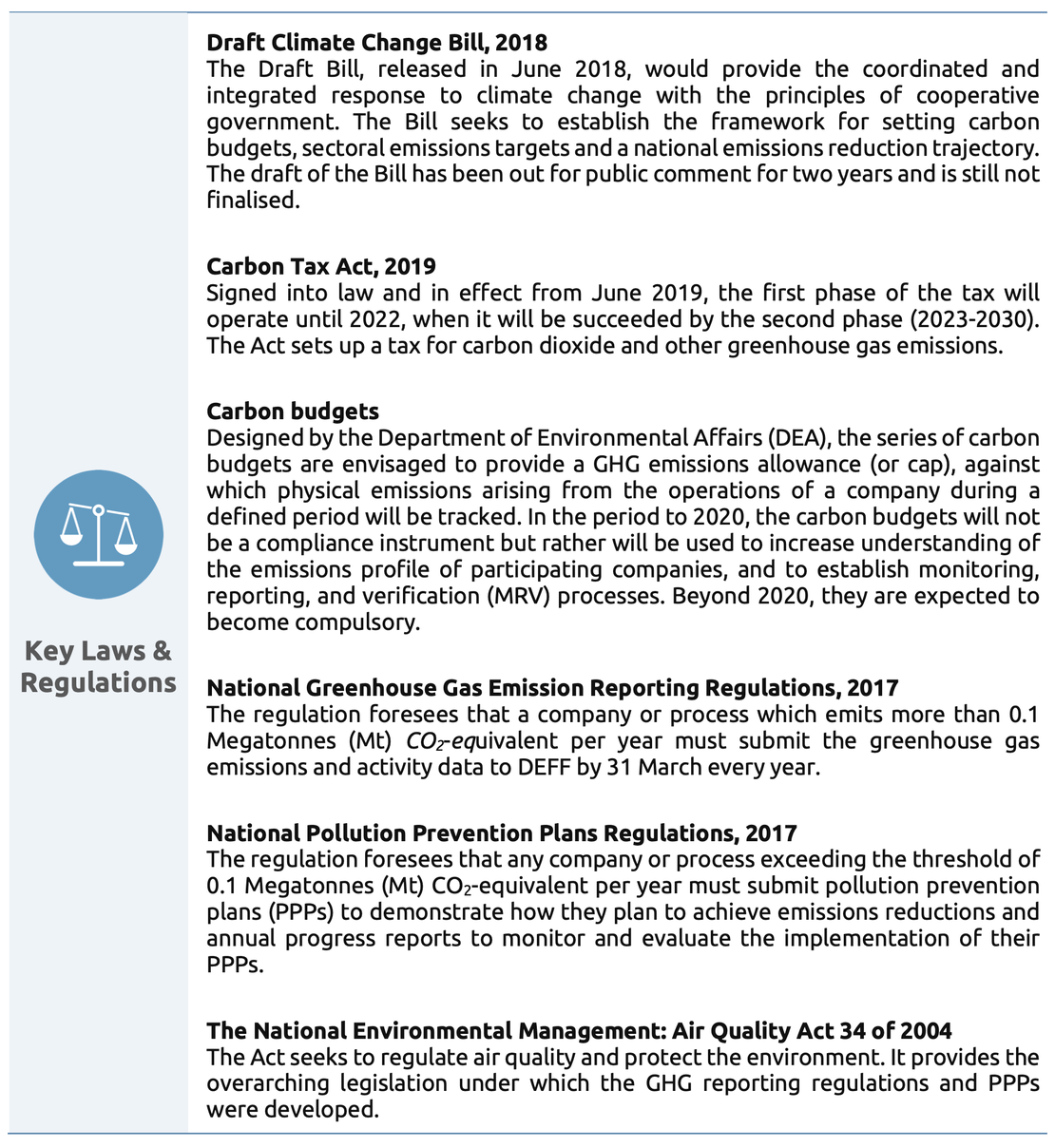 Our 2019 assessment of South Africa's climate governance is available here.