On 10 December 2020, Switzerland submitted its new NDC target to the UNFCCC. The NDC establishes a new floor for Switzerland’s reduction level, updating its previous target of a 50% below 1990 levels by 2030 to ‘at least’ 50%. The CAT does not consider this change, while positive, to be significant enough to be considered a stronger target. Switzerland’s CAT rating remains at ‘Insufficient’.

Despite the inclusion of its 2050 net zero target, the updates to the 2030 target mean that this new NDC fails to commit Switzerland to a 1.5°C fair share contribution towards the global mitigation burden. Such a 1.5°C compatible fair share effort for Switzerland would require a target of zero emissions or below by 2030, from a combination of domestic actions and by implementing mitigation projects abroad.

On 10 December 2020, Switzerland submitted its updated NDC to the UNFCCC, with a slight change from a 50% reduction below 1990 levels by 2030 to “at least 50%” below 1990 levels. Switzerland also committed to increasing the domestic emissions reduction component of its 2030 target to 75%, up from its previous 60%, reducing the amount to be achieved through emissions reductions from abroad from 40% to 25%. This would translate into a domestic target of 37.5% below 1990 levels by 2030 domestically, with 12.5 percentage points to be achieved internationally.

As specified under its first NDC, the country will achieve an average reduction of GHG emissions of at least 35% below 1990 levels between 2021-2030, with a reduction of 35% anticipated by 2025.

The updates in its new NDC leaves Switzerland far from a 1.5°C fair share contribution towards the global mitigation burden. According to the Climate Action Tracker’s equity-based methodology, Switzerland would instead need to set a target of zero emissions or below by 2030, including both domestic and internationally achieved mitigation efforts.

The commitment announced in 2019 to achieve net-zero emissions by 2050 is a meaningful increase in ambition, replacing the previous target of 70-85% below 1990 levels. However, a strategy outlining how this target will be achieved is yet to be released: it is scheduled for completion by the end of 2020. It remains an indicative commitment, with no intention to legislate the target until after 2030 when the CO2 Act is amended again.

Swiss government projections show that under current policies, it will not achieve the new 37.5% domestic component of its 2030 target. Even if all planned policies listed by the Swiss government were implemented, only after a COVID-19-related adjustment to emissions projections is applied would these measures suffice to achieve the target. Far greater policy ambition is needed, particularly in the transport sector which is responsible for almost a third of Swiss emissions. Emissions from the transport sector are currently still above 1990 levels.

The creation of such agreements before the rules governing an international carbon market as outlined in Article 6 of the Paris Agreement have been agreed upon is controversial. Pre-empting the finalisation of the Article 6 rulebook, scheduled for next year’s UNFCCC conference of parties (COP26), means that these agreements may fail to meet the stringency of verification and additionality standards eventually agreed upon once negotiations are finalised. 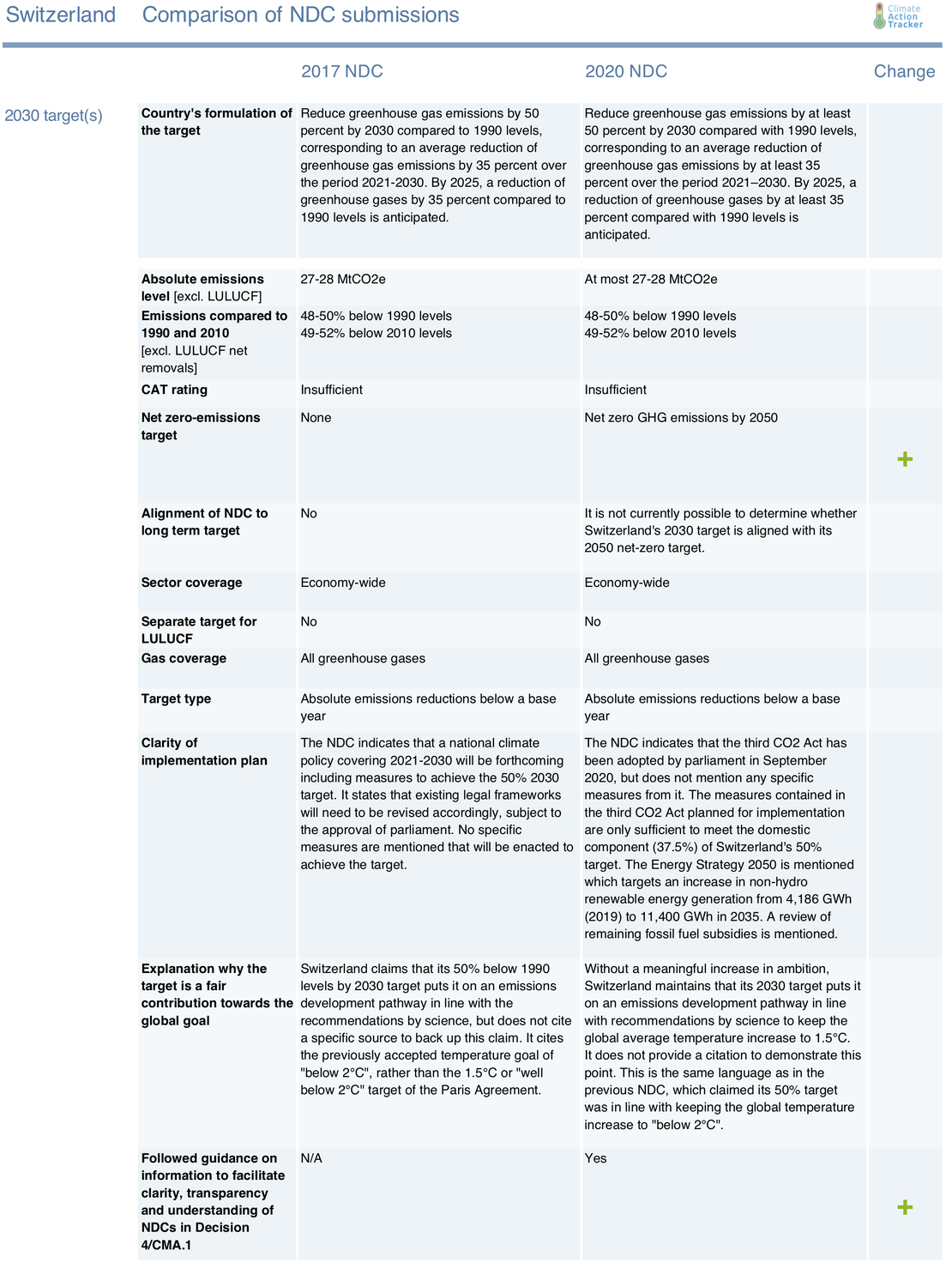