The European Union‘s targets and policies are not yet compatible with the Paris Agreement’s 1.5°C limit. This report, the second country assessment in the Climate Action Tracker's Scaling Up Climate Action Series, analyses areas where the European Union could accelerate its climate action. The report illustrates GHG emissions reductions from such actions, along with other benefits.

Scaling up climate action in the European Union’s electricity supply, residential building and passenger road and rail transport —covering around 60% of the EU’s current energy related emissions—can decarbonise these sectors by 2050.

The reductions in these three sectors alone are enough to reduce EU28 total greenhouse gas emissions by up to 52% below 1990 levels in 2030. This shows that the EU can and needs to ratchet up its 2030 target to make it consistent with the Paris Agreement.

To get on track toward Paris Agreement-compatible emissions reductions, the EU needs to urgently scale up climate action in the transport and buildings sectors, decarbonising them by 2050, with decarbonisation of electricity generation and electrification of transport, heating and cooling as essential steps. 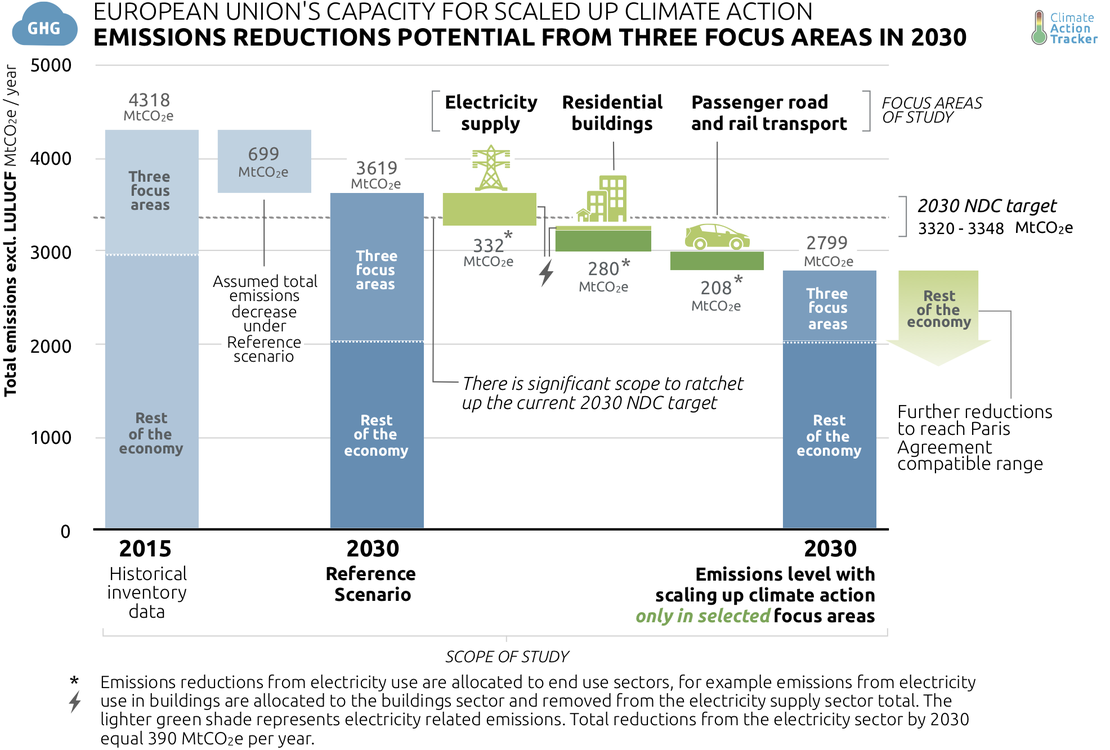 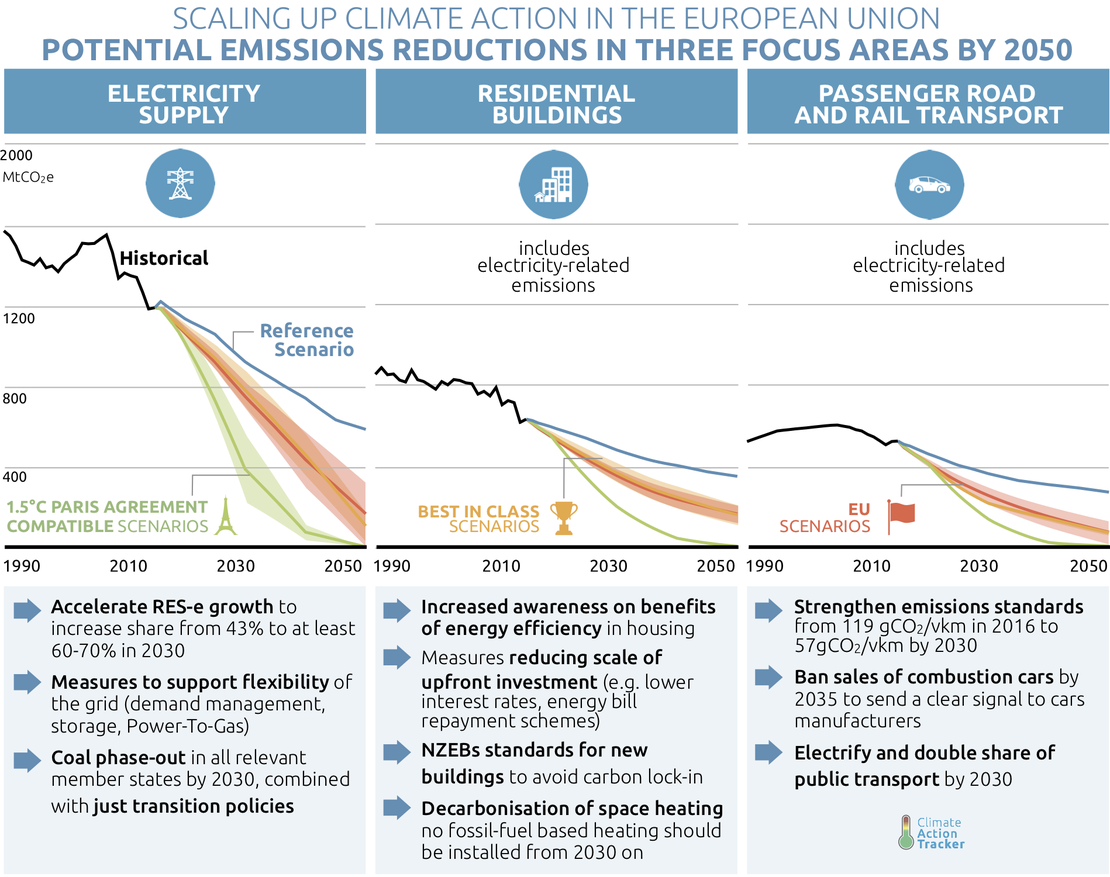 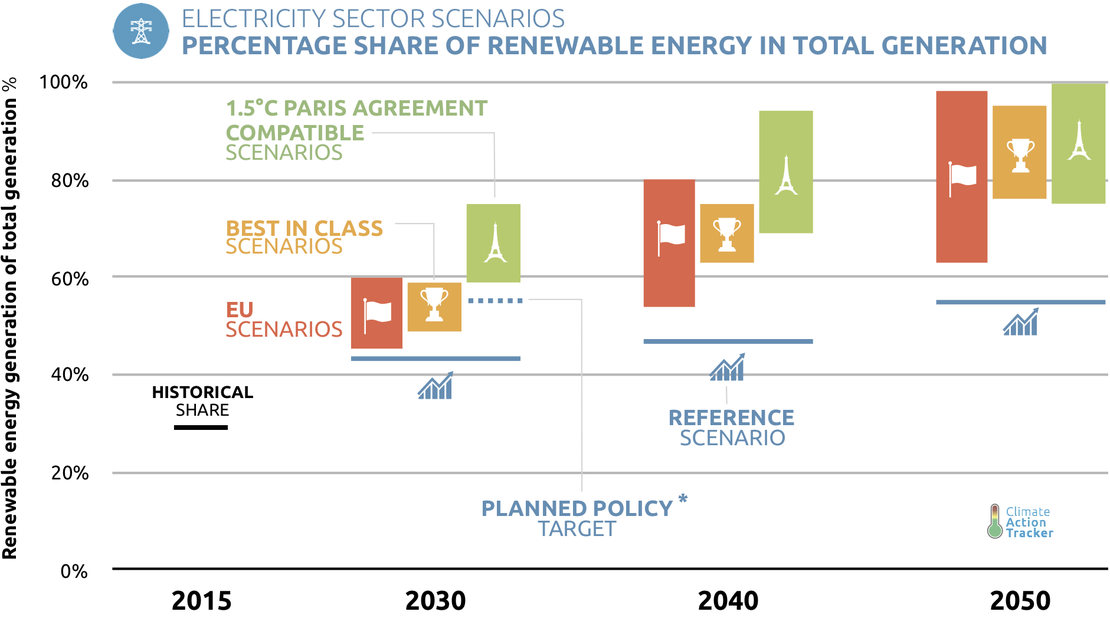 To be Paris Agreement-compatible, the EU needs to deploy renewable energy faster than Denmark, the “best in class” country with the highest growth rate of renewables between 2009 and 2015. Applying Denmark’s rate of growth to the whole of the EU would lead to the share of RES-E reaching between 49–59% in 2030 and 76–95% in 2050.

An essential step to decarbonising electricity generation is phasing out coal: globally by 2050, and in the EU by 2030. There are steps being taken in the right direction: by mid-2018, ten out of 28 EU member states—accounting for 26% of EU coal capacity—have already set phase-out goals for 2030. 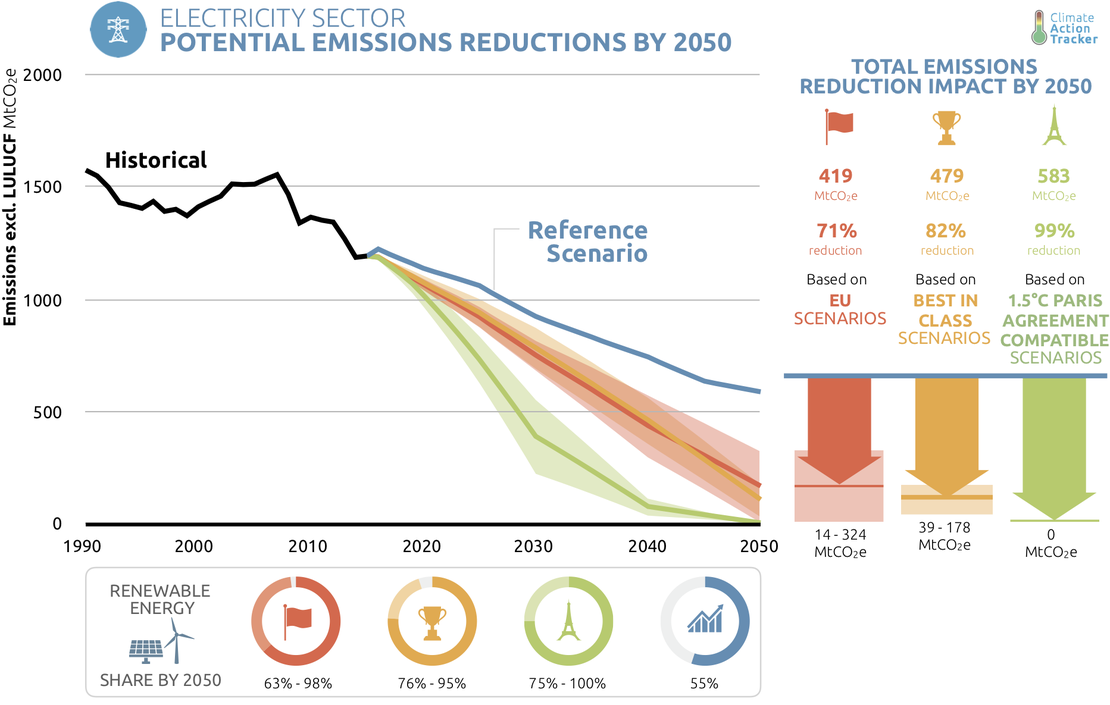 The Paris Agreement 1.5°C-compatible scenario would create, on average, around 350,000 more direct jobs between 2020 and 2030 in the electricity sector alone than the reference scenario, particularly in wind and solar energy. 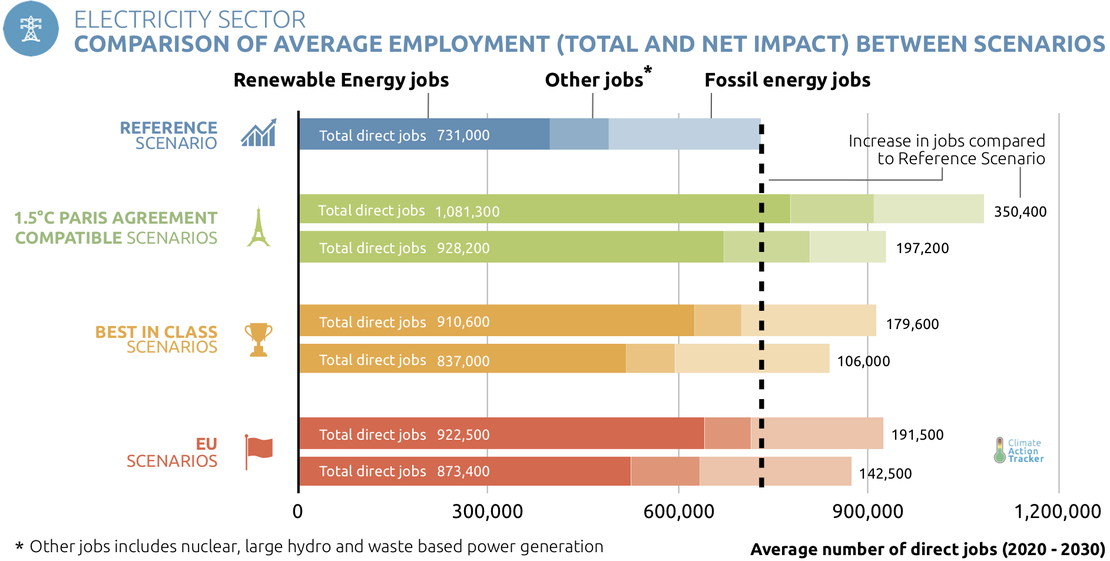 Paris Agreement-compatibility requires the renovation rate of the building sector to increase significantly from the current 1%—ideally to around 5%—with the energy demand per square meter decreasing by between 75% and 100%.

Together with electrification, and phasing out fossil fuels for space heating and cooling, and replacing these with renewable energy, this would result in an almost complete decarbonisation of the sector. It implies higher renovation rates and more efficiency improvements than those achieved if “best in class” policies applied in Denmark were to be adopted in all EU member states. 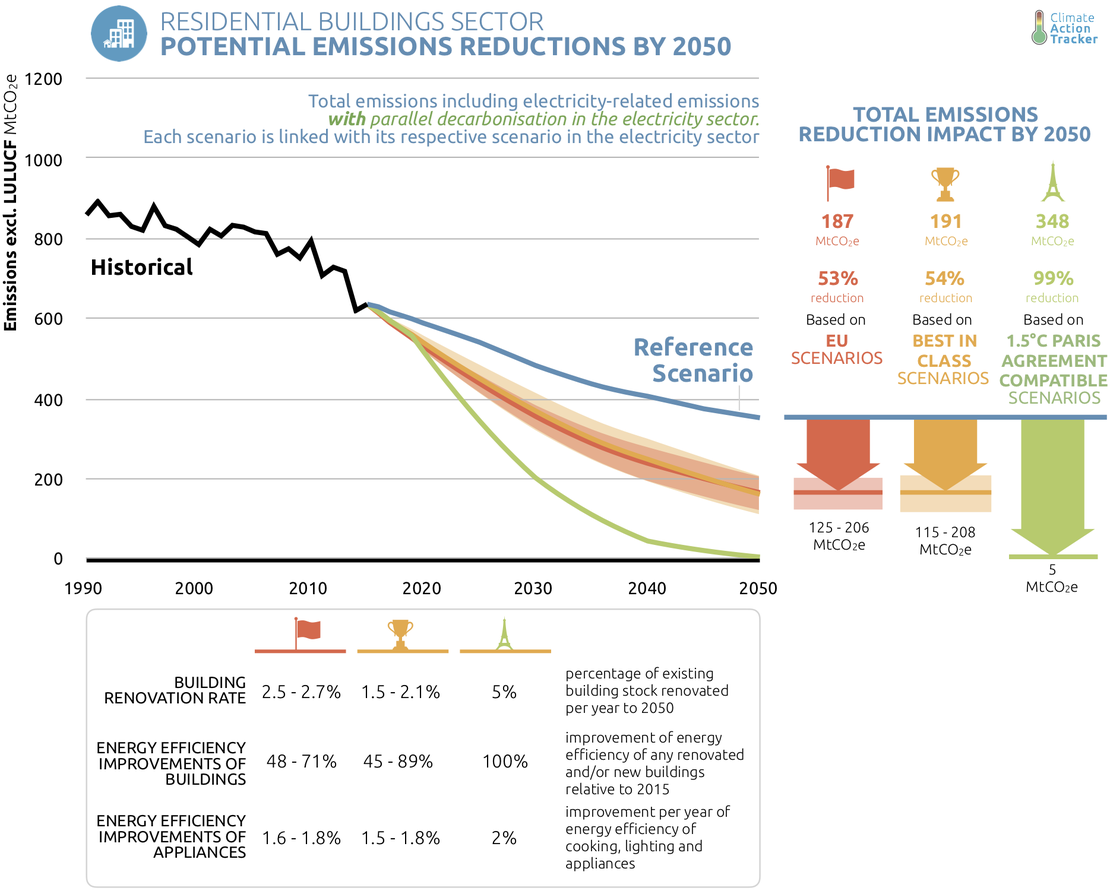 Apart from improving quality of life and helping to reduce energy poverty affecting between 50 and 125 million Europeans, improving efficiency and replacing fossil fuels for heating would significantly decrease energy dependency in the EU by reducing gas imports and reduce air pollution.

The CAT Paris Agreement-aligned benchmark requires the EU to increase its share of electric vehicles (or other emissions-free vehicles) in new sales from today’s 2% to 100% in 2035 resulting in full decarbonisation by the middle of the century. The EU also needs to apply stringent standards for CO2 emissions intensity of new vehicles. Member states also need to increase their share of public transport, and follow the example of frontrunner member states such as the Czech Republic and Austria. 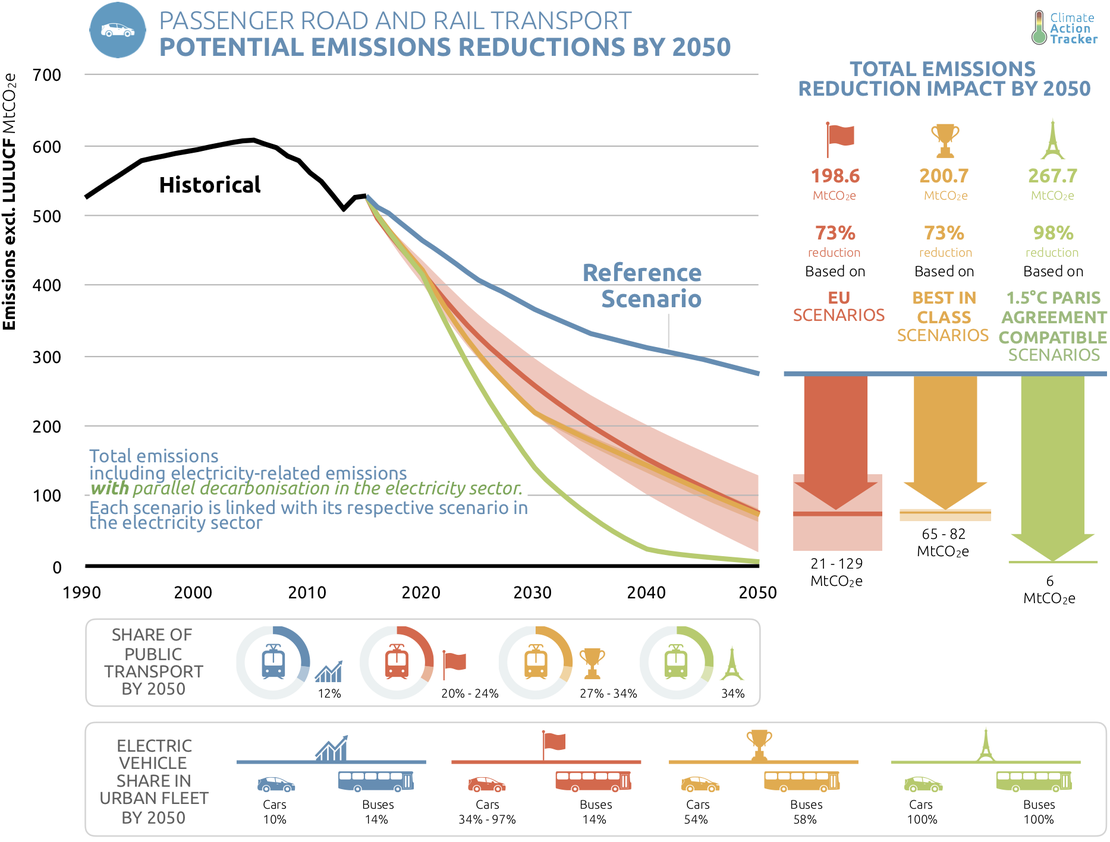 Decarbonising the transport sector would significantly decrease reliance on energy imports and help reduce air and noise pollution. Road transport is responsible for 30% of NOx emissions in the EU28.

Scaling Up Climate Action in Argentina

Scaling Up Climate Action in Australia

Scaling Up Climate Action in Indonesia

Scaling Up Climate Action in Turkey