Argentina has shown many positive developments in the climate space since 2015, but Argentina’s climate commitment in 2030 is not consistent with holding warming below 2°C, let alone limiting it to 1.5°C as required to achieve the Paris Agreement. This report, the third country assessment in the Climate Action Tracker's Scaling Up Climate Action Series, analyses areas where Argentina could accelerate its climate action. The report illustrates GHG emissions reductions from such actions, along with other benefits, such as the positive impact on employment in low-carbon-orientated sectors.

Scaling up climate action in Argentina’s electricity supply, land-based passenger and freight transport and residential building—covering around 40% of Argentina’s current emissions in 2014—can successfully decarbonise these sectors by 2050. Increasing climate action now would initiate technically feasible sectoral transitions towards a zero-emissions society while directly benefitting Argentina’s sustainable development agenda, including reducing the adverse health impacts from air pollution, and increasing participation and social justice in mobility and housing.

Argentina will still need to take additional action in other sectors such as agriculture and land-use sectors in order to decrease economy-wide emissions by mid-century in line with the Paris Agreement’s temperature limit.

Accelerated climate action in line with the Paris compatible scenarios in the three sectors would also allow Argentina to overachieve its unconditional and conditional target of limiting emissions to 322 MtCO2e by 2030. An important conclusion from these findings is that it is beneficial for Argentina to considerably ratchet up its 2030 target to be consistent with the Paris Agreement. 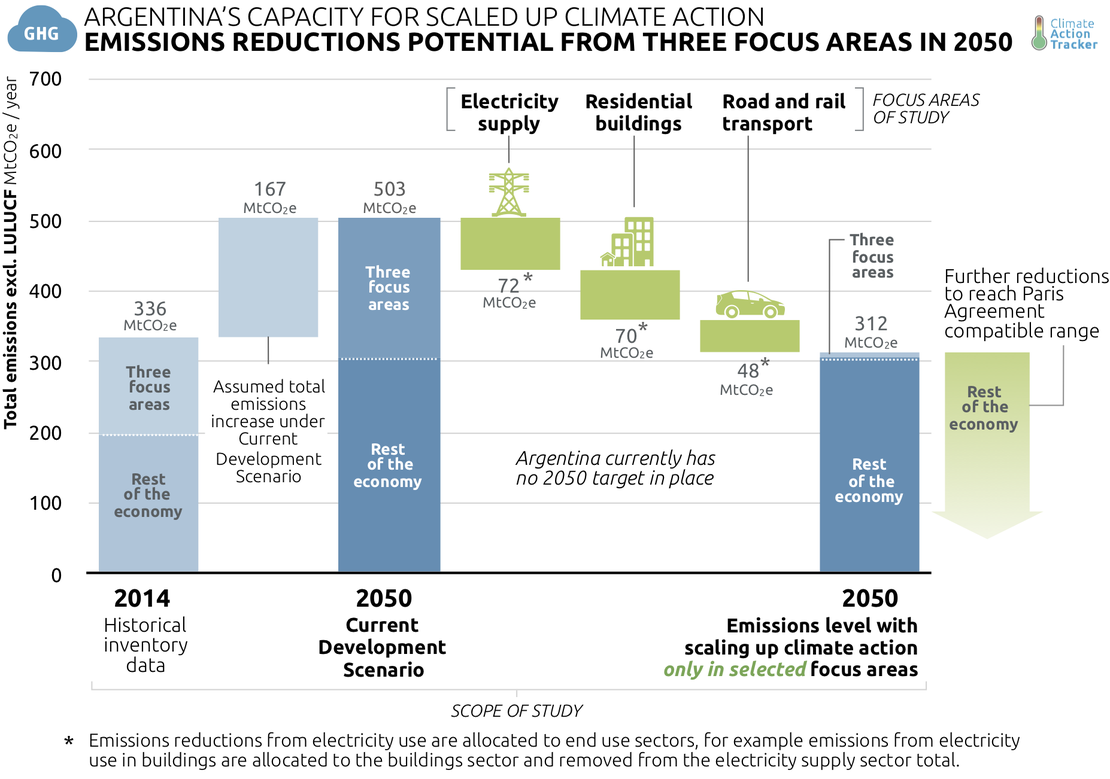 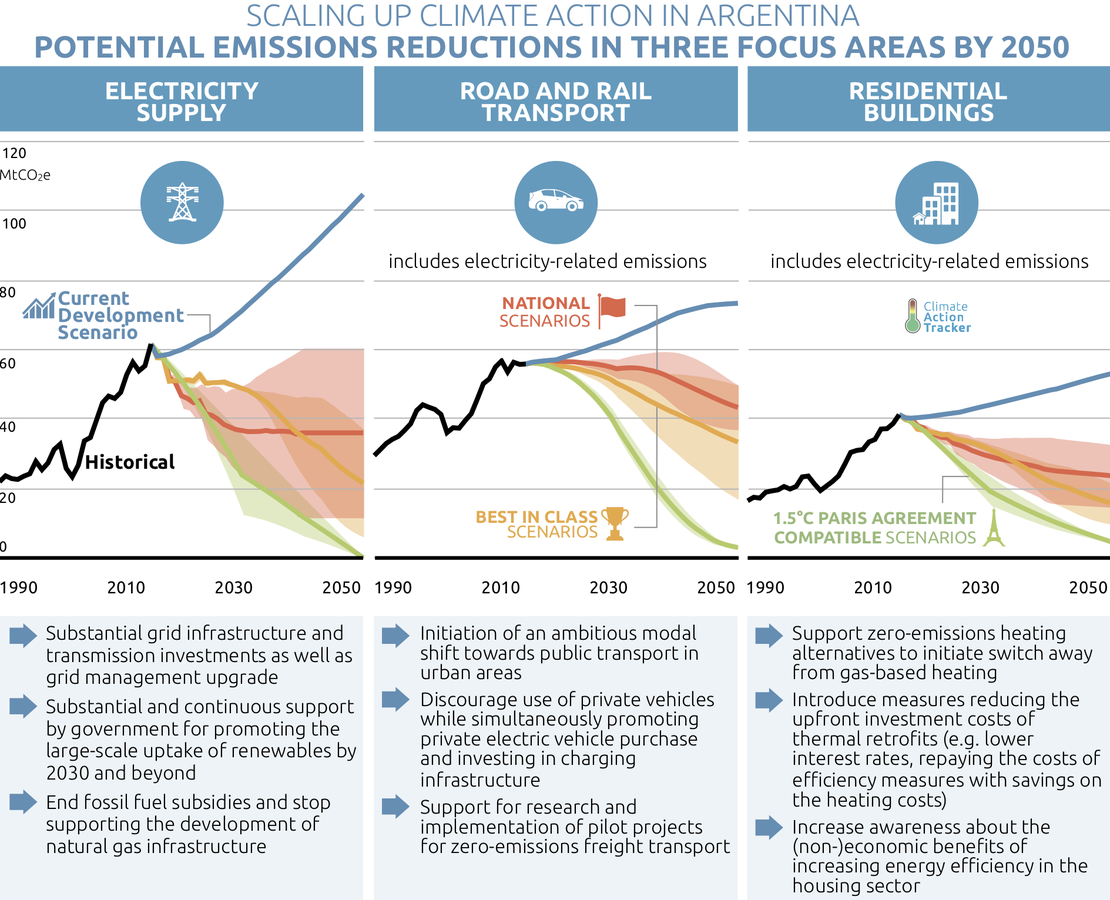 Our findings highlight that scaling up climate action in the Argentinian electricity supply sector through large-scale expansion of renewable energy could reduce GHG emissions from electricity generation by up to 80% below 2014 emissions levels by 2040 and completely decarbonise the sector by 2050. These ambitious scenarios developed by national institutions and stakeholders would be in line with a 1.5°C Paris Agreement compatible pathway to 2040.

A fully decarbonised electricity sector is critical for enabling low-carbon electrification trends in land-based passenger and freight transport as well as residential housing to get in line with the Paris Agreement temperature limit. Given its rich natural endowment of renewable resources and ambitious 2025 renewable expansion targets, if it strengthens policy efforts to ensure it achieves these targets, Argentina could become a global frontrunner in achieving a successful energy transition. 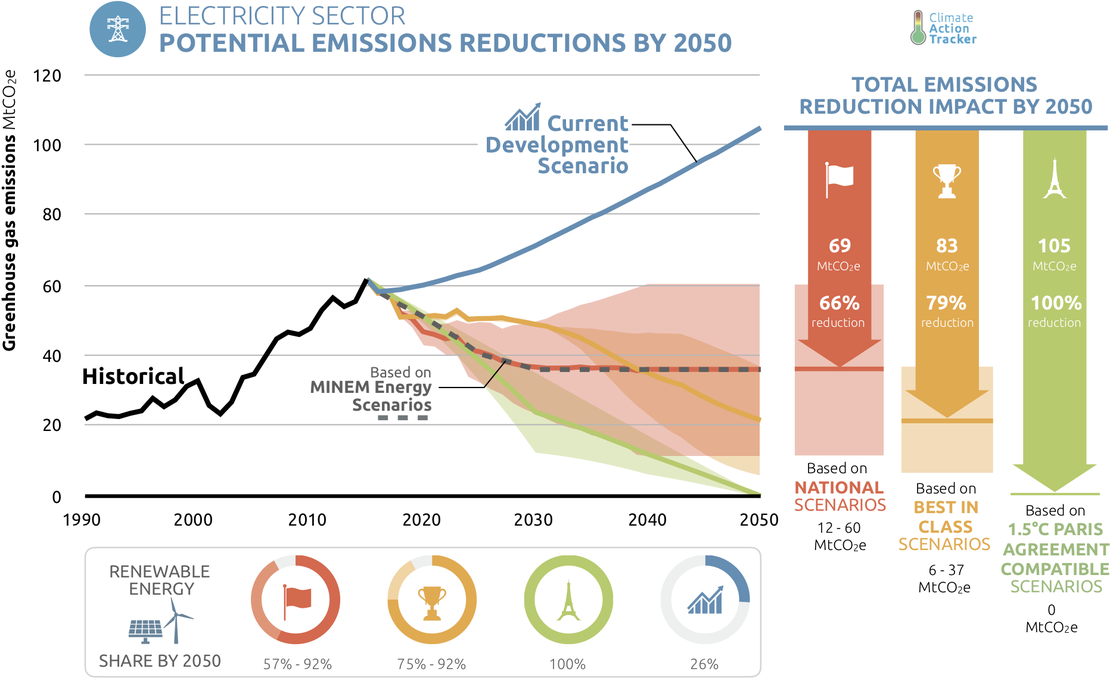 The CAT sees significant risks in Argentina’s planned development of large-scale gas extraction and export infrastructure. Those investments could cause a lock-in in high-emissive energy supply. Heavy reliance and infrastructure investments in natural gas may also hamper decarbonisation efforts in demand sectors such as transport and buildings.

Transitioning towards a low-carbon, renewables-based electricity supply by 2030 is likely to support more domestic employment opportunities in Argentina compared to the Current Development Scenario, where the majority of capacity additions are fuelled by natural gas. This energy transition provides jobs in technologies and sectors that are more likely to form the core of future electricity supply, both in Argentina and globally.

Under the Current Development Scenario, approximately 37,000 people a year, on average, are directly employed in developing new electricity supply capacity and operating and maintaining both existing and new capacity over the period of 2016–2030. We estimate these investments would stimulate a further 103,000 indirect and induced jobs a year, on average, such as jobs in cement production for the concrete foundations of wind turbines.

1.5°C Paris Agreement Compatible scenarios support up to 29,000 directs jobs per year more than Current Development Scenario. The estimated employment impact across all other scenarios all support at least as many jobs as the Current Development Scenario. They range between approximately 40–66,000 direct jobs a year and a further 98–135,000 jobs when considering the wider indirect and induced impacts of the investments. 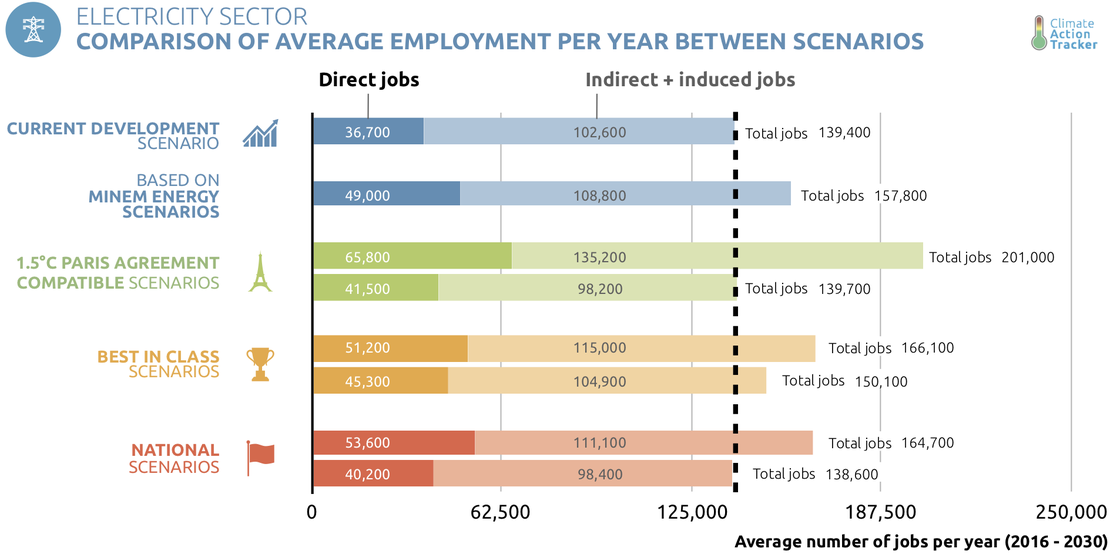 The recent upward trends of GHG emissions from the transport sector in Argentina highlights the need to accelerate action to fully decarbonise this sector by mid-century to be compatible with the Paris Agreement. Our analysis on accelerating climate action in the transport sector focuses on land-based passenger and freight transport, with a particular emphasis on the impact of transitioning towards zero-emission cars, buses and trucks. 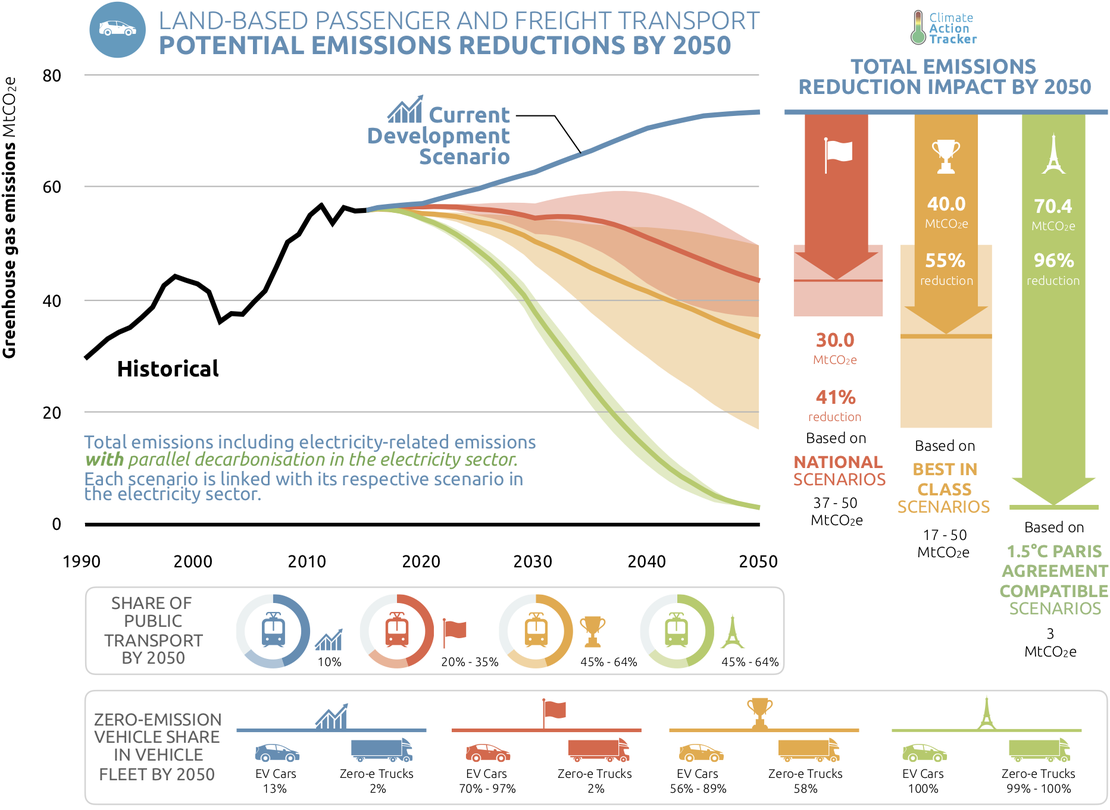 The electrification of transport and a modal shift away from fossil-based vehicles reduces adverse effects of air and noise pollution and their harmful effects on health. This directly promotes provision of healthy lives and well-being for all ages in line with Sustainable Development Goal 3.

Even without any further climate action in the electricity supply sector beyond current levels, the above mentioned policies in Argentina’s residential buildings sector could still reduce emissions by up to 31% below today’s levels by 2050. 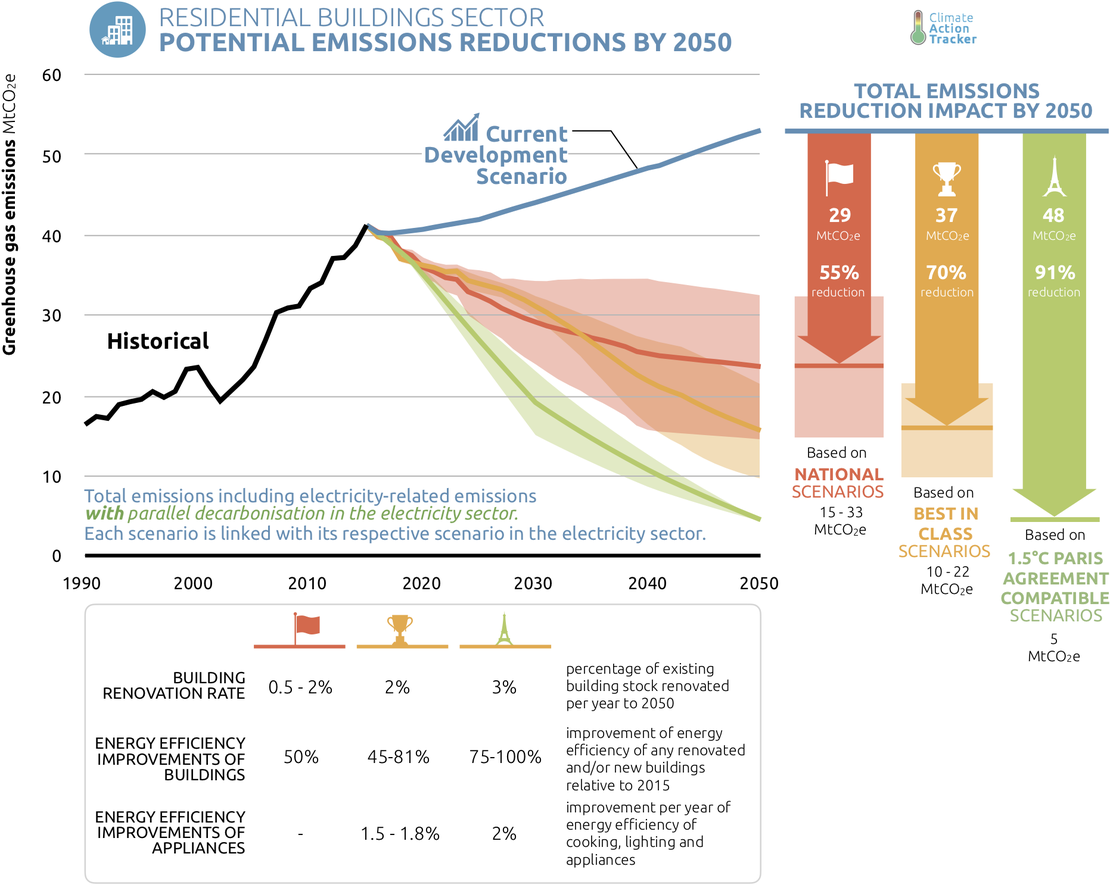 Measures in the residential buildings sector proposed by national researchers and other national stakeholders can already drive ambitious mitigation. Such proposed measures include increasing the thermal retrofit rates of existing buildings by 2% annually, with a 50% energy efficiency improvement by 2020 or a 90% market share of heat pumps of all heating appliance being sold by 2030. Such measures would closely align Argentina with action international frontrunner countries are implementing, and would bring Argentina close to a low-carbon transition of the residential housing sector if implemented.

Scaling Up Climate Action in Australia

Scaling Up Climate Action in the EU

Scaling Up Climate Action in Indonesia

Scaling Up Climate Action in Turkey